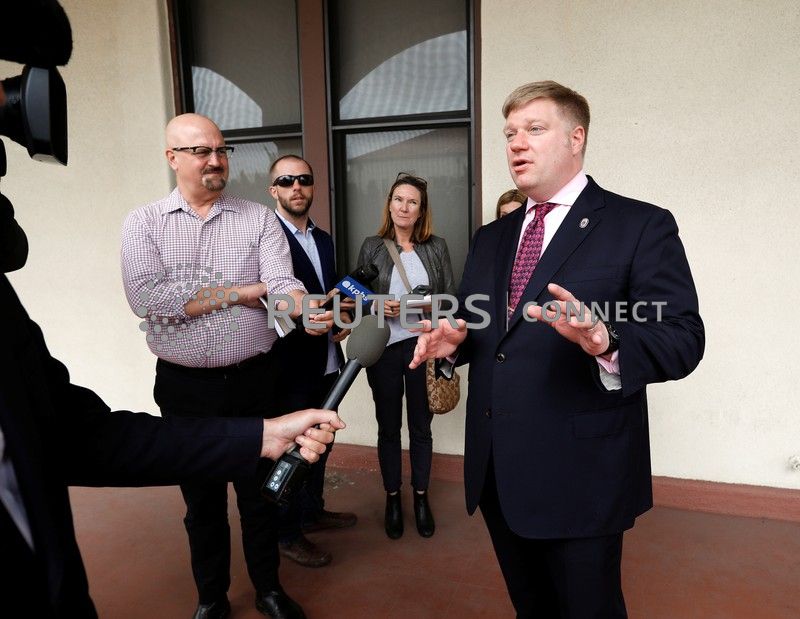 SAN DIEGO (Reuters) – A judge in the court-martial of a decorated Navy SEAL charged with war crimes in Iraq said on Wednesday the trial would start at least a few days late as lawyers on both sides grappled over allegations that prosecutors illegally snooped on the defence.

The timing of the trial could be rendered moot in light of reports that President Donald Trump is considering offering a pardon to Special Operations Chief Edward Gallagher and other U.S. military personnel accused or convicted of battlefield atrocities.

Gallagher is charged with fatally stabbing a helpless, wounded Islamic State fighter in his custody and with shooting two unarmed civilians – a school girl and an elderly man – from a sniper’s perch during his 2017 deployment to Mosul, Iraq.

In addition to murder and attempted murder, Gallagher is charged with obstruction of justice for allegedly trying to intimidate his accusers into silence.

The 39-year-old career combat veteran and platoon leader has pleaded not guilty to all charges. Defence lawyers say the allegations against Gallagher were fabricated by subordinate SEAL team members disgruntled with his leadership style and seeking to force him from his command.

The New York Times reported on Sunday that Trump was reviewing several high-profile U.S. war crimes cases, including Gallagher’s, for possible pardons to be announced over the Memorial Day holiday honouring military veterans at month’s end.

Timothy Parlatore, the civilian attorney leading Gallagher’s defence, told reporters after the hearing on Wednesday at U.S. Naval Base San Diego that he had discussed the possibility of presidential clemency with his client. He declined to say whether Gallagher was inclined to accept a pardon.

“We’ve not asked for one,” he told Reuters on Tuesday night. During a recess in court, Gallagher, dressed in Navy whites, declined comment when asked about a pardon by reporters in the courtroom.

Characterizing Gallagher’s court-martial as a wrongful prosecution, Parlatore disputed the notion that granting a pardon before the case concludes would preempt justice.

“If the president decides to step in, that’s what the commander does,” he told reporters.

The presiding judge, Navy Captain Aaron Rugh, granted additional time to resolve questions over tactics Navy prosecutors used to pinpoint the origin of leaks from case files the judge had placed under seal. He ordered prosecutors to furnish the defence more information about the scope and nature of its probe, including notice of whether anyone remained under scrutiny.

Parlatore insisted he would need at least two more weeks to prepare for trial once matters of alleged prosecutor misconduct were settled.

He has accused prosecutors and the Naval Criminal Investigative Service (NCIS) of conducting illegal surveillance of defence attorneys and reporters with electronic tracking software secretly embedded in emails. Such methods were tantamount to warrantless wiretapping, he said.

Prosecutors said the email “auditing tools” it used were designed merely to detect the flow of emails without revealing their content.

Nevertheless, Parlatore said he may request that the lead prosecutor be disqualified from the case, and for recusal of the judge.

Rugh, denying that he had ordered a leaks investigation, gave Parlatore until this Friday to file any remaining pleadings on the issue and set a hearing for May 29 – the day after the trial had been scheduled to commence – to argue those motions.

Barring any further upheavals, Rugh said, he hoped to seat a trial jury by May 31 and to begin hearing testimony the following week.

Trump weighed in on the Gallagher case publicly in March, ordering the defendant moved to less restrictive pre-trial confinement “in honour of his past service to our country.”