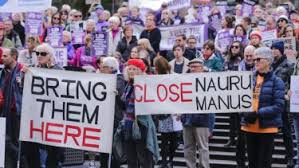 CANBERRA, 20 FEBRUARY 2019 (SMH) – The government of Nauru will be the final arbiter of whether any refugees or asylum seekers are brought to Australia from that island as a result of the medical transfer bill that passed through Parliament last week.

The Department of Home Affairs was seeking legal advice on Tuesday about new Nauruan laws imposing further restrictions on the circumstances in which residents of the tiny island nation can be sent overseas for medical treatment.

The new laws also prescribe that a transfer shall not be approved “on the recommendation of an overseas health practitioner by telemedicine examination or diagnosis”. That appears to jeopardise the possibility for a specialist in Australia to successfully recommend a medical transfer after consulting the patient by video conference, for example.

The spokeswoman for Coleman said: “The governments of Nauru and Australia have worked together for a number of years. We will continue to work with Nauru in light of the laws passed through the Australian Parliament.”

A spokeswoman also said the Australian government had no involvement in Nauru’s new laws.

The Guardian reported that in September, Nauru twice blocked medical transfers and refused permission for an air ambulance to land – despite court orders from Australia.

Home Affairs officials told a Senate inquiry on Monday night that 431 people were still on Nauru, comprising 330 refugees, 26 non-refugees and 75 people whose refugee status was unresolved. There are 456 refugees and 128 non-refugees in Papua New Guinea.

Lawyer and refugee advocate George Newhouse said Nauru’s crackdown on the conditions for medical transfers effectively made the refugees “prisoners” of the island nation.

“Australia is now unable to comply with its own laws,” he said. “This could form the basis of a fresh constitutional challenge to offshore processing.”

Nick Martin, an Australian doctor with experience in medical transfers from Nauru, said it was “a disgusting situation that treats desperate refugees as political pawns”.

“They want it both ways – keep the refugees there and then say they can’t interfere when Nauru decides to hold on to what they see as an asset,” he said.

Home Affairs secretary Michael Pezzullo has also confirmed the government intends to send any sick refugees and asylum seekers transferred from Nauru and PNG to Australia’s remote Christmas Island unless they required specialised treatment only available on the mainland.

“That is the policy of the government,” he told a late night Senate estimates hearing.

Labor leader Bill Shorten said as long as the treatment was delivered and made people better, it did not matter if it took place on the remote island. “That’s fine,” he said. “The issue here is the safe treatment of people within the context of stronger borders.”

The detention centre on Christmas Island – which is far closer to Indonesia than Australia’s mainland – was mothballed last year, but Prime Minister Scott Morrison last week ordered it to be reopened in the wake of the medical transfer bill passing the Parliament.

Independent MP and doctor Kerryn Phelps, who drove the medical transfers bill through the lower house, said it was a “subversion of our entire model of representative democracy” to send sick people to Christmas Island for treatment, instead of the mainland.

“I can’t see how that’s possible when the hospital at Christmas Island has six to eight beds, has no specialised services and is even further away from Australia than PNG is,” she said.