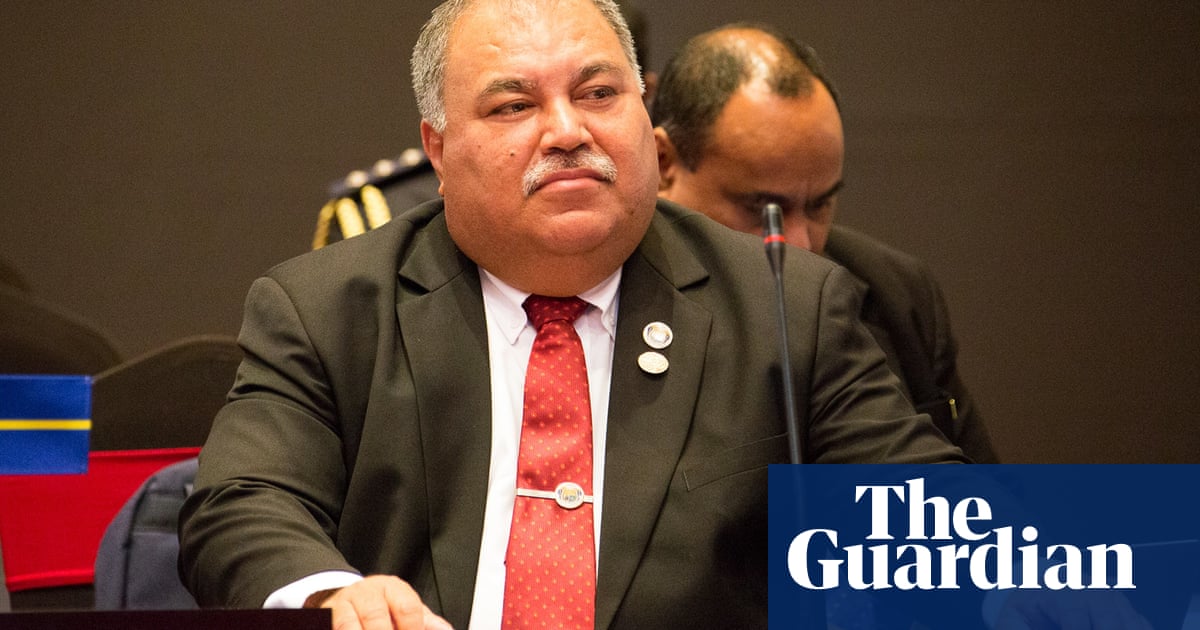 The government of Nauru has branded claims by its former president that the country’s offshore detention deal with Australia had led to corruption and greed on the island “pure fiction”. Picture: THE GUARDIAN

YAREN, 25 APRIL 2019 (THE GUARDIAN) – The government of Nauru has branded claims by its former president that the country’s offshore detention deal with Australia had led to corruption and greed on the island “pure fiction”.

Sprent Dabwido, who was president of Nauru from 2011 to 2013, recently gave an interview in Australia, where he is living out his final days with terminal cancer.

Dabwido told Ten’s The Project and SBS that he regretted signing a deal with Australia’s then prime minister Julia Gillard to restart offshore processing.

“In doing that we have turned our country upside down,” he told The Project last week.

Dabwido said the Australian money had been destructive to his nation and that corruption and greed had overtaken the island.

“I think I was being very naive. I thought we could, you know, quickly establish ourselves and put the money aside and … get the country back on its feet. But what it did was it did the opposite.”

On Wednesday the government of Nauru released a lengthy statement in response to Dabwido’s criticisms.

“While we are saddened by Dabwido’s health issues, it is a great shame he has chosen to leave a legacy of dissention and dishonesty about our country and we are obliged, on behalf of the people of Nauru to correct the record.”

The statement said Dabwido had “mismanaged” the money generated by the August 2012 deal, and that the current government, led by Baron Waqa, had built the island’s finances and set the country up for future generations. Waqa took over the presidency in June 2013.

“Nauruans have not only benefited financially but have embraced a new sense of unity, culture and pride, highlighted by the 50th anniversary of independence held last year,” it continued.

“We have transformed our legal system to make it one of the most accountable and just systems in the Pacific.

The Government has done all of this despite attempts by people like Dabwido to undermine the process, assisted by some Australian media outlets with activist agendas that seek to interfere in Nauru’s domestic politics.”

The statement said Dabwido’s comments on conditions in the processing centre were “false”.

Dabwido did not describe conditions in the centre during the interview but did say that the lack of a “future” for people was akin to torture.

“We believe asylum seekers and refugees are treated better in Nauru than in any other processing centre in the world,” the Nauruan government said.

“The only ‘criticism’ comes from those who have either never been to our country and/or have clear and often stated political agendas.”

The Nauruan government is notoriously reticent to answer questions, in particular from several Australian media outlets, including the Guardian.

Nauru’s economy is highly dependent on the Australian offshore processing regime, which is holding fewer and fewer refugees and asylum seekers as they resettle in the US or temporarily transfer to Australia for medical treatment.

Wednesday’s statement trumpeted transformations in Nauru’s health, employment, education and legal system, which it said had become “one of the most accountable and just systems in the Pacific”.

The claim contrasts with the concerns frequently raised in recent years over crackdowns on legal officers, judges and opposition figures.

Dabwido is one of the so-called Nauru 19, a group of people including former ministers and presidents, who were involved in anti-government protests outside Nauru’s parliament in 2015, demonstrating against judicial expulsions.

The government sought to convict and jail the protesters, and in September the Australian judge Geoffrey Muecke ruled that there was no prospect of a fair trial for the group and found evidence of a government-run blacklist.

Muecke said the government – and in particular the justice minister, David Adeang – had acted in “a shameful affront to the rule of law”.

Wednesday’s statement rejected the description of the events as “protests”, instead accusing Dabwido and others of rioting.