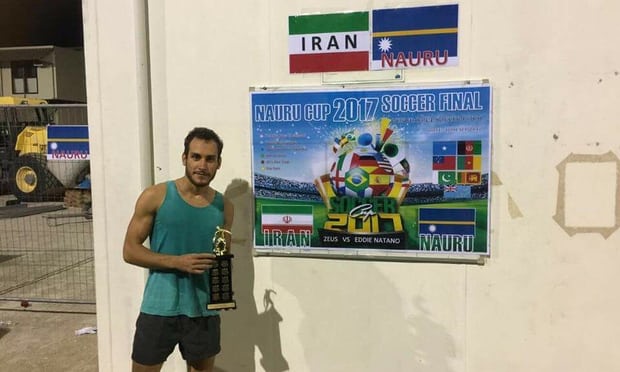 Fariborz Karami’s body has been brought to Australia from Nauru for burial. Picture via The Guardian

YAREN, 18 JULY 2108 (THE GUARDIAN) — The body of Fariborz Karami, the Iranian asylum seeker who took his own life on Nauru more than a month ago, has been flown to Brisbane after an emotional standoff about where he would be buried and donations from anonymous philanthropists in Australia to cover the cost of his funeral.

Extended family members in Australia have taken responsibility for Karami’s funeral and burial. Anonymous donors have given several thousands of dollars to cover the cost of flying his body to Australia, and for funeral and other costs.

The Australian Border Force initially told Karami’s mother, Fazileh Mansour Beigi, she could either agree to have him buried on Nauru or repatriated to Iran. Mansour Beigi refused, saying in either place his grave would not be able to be visited by family.

Mansour Beigi staged a vigil outside the conex container where her son’s body was held inside the Australian-run regional processing centre on Nauru, saying she would not allow her son to be taken unless it was into the care of family in Australia.

After a tense and emotional standoff – Mansour Beigi and her surviving 12-year-old son have been acutely unwell – the ABF ultimately relented and allowed for Karami’s body to travel to Australia. It landed in Brisbane late on Sunday.

But on Saturday, the ABF formally rejected a request from Mansour Beigi to be allowed to attend her son’s funeral or burial: “The ABF does not support your request,” the ABF’s letter said.

A legal challenge is being prepared to bring Mansour Beigi and her surviving son to Australia, citing their failing physical and mental health. The funeral home has agreed to hold Karami’s body for a limited time, in case his mother is ultimately able to attend.

Staff on Nauru have told Guardian Australia at least 19 refugees and asylum seekers have been moved off the island to Australia in the past fortnight.

Many of those have been moved following court orders or legal challenges, mainly around critically ill children, but others have been moved, including entire families, at the ABF’s direction.

In addition, 21 refugees selected to be resettled in the US flew out of Nauru on Sunday, bringing to 237 the total number taken to America from the island.

Karami’s body was found inside his tent in the regional processing centre on the morning of 15 June. An autopsy revealed he died from an overdose.

In the lead-up to her son’s death, Mansour Beigi had written repeatedly to the ABF, to doctors on the island and outside Nauru, pleading for help for her children, who were growing dangerously mentally ill.

“My kids are depressed … many times, I have asked for your help, but instead of assisting me, each time you have wounded me more,” she wrote, two days before her son’s death. “You have not taken my request seriously. If my kids and myself get worse, you will be responsible.”

Following the departure of her eldest son’s body for Australia, she wrote an open letter pleading for her surviving younger son, who has suffered severe long-term mental health issues, not to be ignored.

“I’ve written many letters, with hope, from this suffocating hot tent. I asked for assistance for my homeless children. I was happy after publishing my letters. I thought, there are organisations and people who would help us end this dreadful condition. I thought they would save my children before anything happened to them. However, it was an illusion and I lost my educated, athletic child, who had hope for his future.

“Now, with tears in my eyes, I’m writing again to mourning mothers around the globe. Mourn for a mother like me, whose 26 year-old-son, after five years of a rough, unbearable life, in 40-degree heat, in the ABF’s mouldy tents, lost his precious life alone. They (the ABF) kept his corpse for 30 days in front of my eyes and the eyes of his 12-year-old brother. Now, they have dispatched him, lonely and unaccompanied, to Australia.

“If humanity is still alive, if anyone’s heart still beating for a homeless child’s life, don’t leave my 12-year-old son alone. Be my voice and don’t let me lose him as well.”

In response to questions about Karami, the Department of Home Affairs has maintained: “Further inquiries should be referred to Nauruan authorities … the department does not comment on individual cases.”

Questions to the Nauruan government have not been answered.