National and the local – Women in leadership and the realities 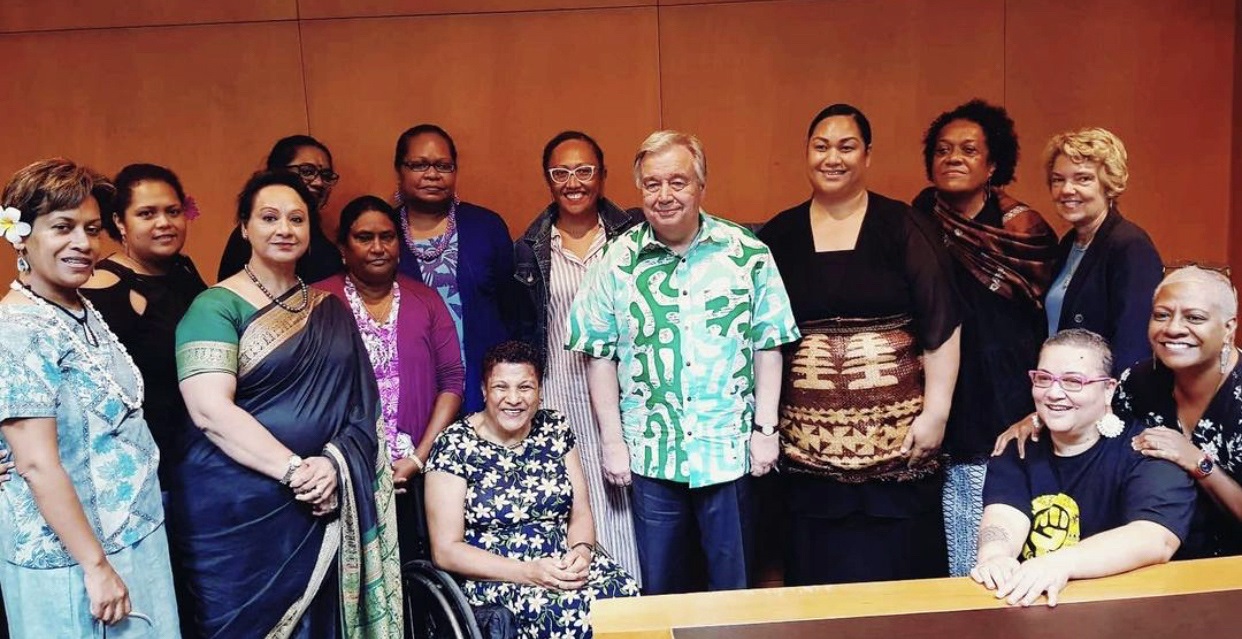 In a qualitative research report on Violence Against Women in Politics, published with femLINKpacific’s national research support, the assessment found that factors that influence and create barriers are socio-cultural and institutional, involving the electoral system and political parties.

Twenty-nine (29) politically active women who were either current or former members of Parliament, former candidates and political party officeholders, were interviewed, with their identities kept anonymous.

Furthermore, the assessment found that the impact of COVID19 on women’s political participation has been significant as “health concerns and the pandemic’s economic impact have had profound effects on women as they struggle with income loss and food insecurity”.

femLINK’s documentation of lived realities of local women leaders in Fiji and their assessment of their prioritised human security issue, also had similar findings.

In the June-July 2020, district convenings in 10 locations in Fiji, the women leaders top concerns were “food on the table and health (nutrient-rich meals) and access to medical facilities”.

Similarly in the national consultation of August 2020, food, health and economic security were the highest priority with political security being the least of their concerns.

These issues are being closely followed as Fiji goes to the national polls next year and national women in leadership and the successful participation of women in elections become so important.

The local-level barriers At the local-level, women leaders are just as concerned about the national representation as they are with their own.

Shakuntla Permal is an advisory councillor in the Lautoka area, and while she is working in her community amidst the natural disasters and in the context of a pandemic, her passion and ambitions as a rural women leader, constantly face the barriers of women aspiring for national leadership positions.

Shakuntla plainly points her challenge to the stereotypes of what a women’s role should be.

“The very first one that I would like to discuss is the stereotypes and attitudes of men towards rural women leaders. When women are working in the community, they ignore us and put our voices down.

They talk against us,” outlined Shakuntla in a panel discussion of Western Division rural women leaders.

“There is a case where I am looking after an area of 10kms. And between the two rivers, which are very low-lying areas, which gets flash flooding.

“When I was doing my initial survey, I received calls from men in other communities, asking me what I am doing in this person’s house in a community workers house etc. Why I was there? What am I doing?

“But we women leaders are the first responders and the initial damage assessment are done by us before it is done by the team from NDMO.”

Shakuntla was the sole community person included in a closed-door conversation between the UN Secretary-General, Antonio Gutteres and women’s organisations in his May 2019 visit.

Even in the time-limited meeting, Shakuntla was adamant about providing the details of the climate crisis in her community to the UNSG, providing on-the-ground lived realities of the impact.

Sushma Lal, another advisory councillor of Raviravi, Ba, constantly advocates for clean drinking water and is an active user of femLINK’s platforms to voice her community’s priority needs.

“The main issue is water. People are drinking very dirty water in Raviravi with some 300 people.

The dam is not properly upgraded and when it rains, the dam and water gets very dirty.

“The children and old age people are drinking from that water and get sick,” outline Sushma.

The drainage problems and social welfare system have also been her priority issues of concern.

Beda Anjali, 33 years old, is an advisory councillor in Nabouwalu, Bua and has been in that role for four years.

She outrightly says that the work is challenging as she looks after three communities with a population of some 108.

While talking about the challenges, she also mentions a highlight, which has been the approval of a large water project for her community after they asked her for this.

Meeting the Rural Development Minister Inia Seruiratu,who urged her to write a letter, so that this could be included in the Northern Division, became the change for her as she took the local-level issue direct to the national.

While the water project has been approved, it is yet to be commissioned.

“I already spoke, but nothing has been done yet. So I will keep raising my voice and do better networking,” said Beda.

It’s a feminist media organisation like femLINK that she constantly looks to for amplification and support.

The advisory councillors have joined their network of rural women leaders to jointly convene for submissions to the Fijian Government, calling for equal representation of women as advisory councillors, and throughout the local-level structure to national spaces.

In an outcome statement of the Western Division Rural Women Leaders Community Media Network (RWLCMN) which converged in Nadi from March 2021, the women leaders called for the need to introduce temporary special measures (TSM) for women at various levels of rural leadership and decision-making processes.

Included in that specific call, was also to formalise the recognition of women leaders at HART Homes, and to consider increasing the allowances for advisory councillors.

Women in local-level leadership positions became a central focus of discussion in the North where some 50 women leaders convened the following week in Labasa and Savusavu.

They committed themselves and called for participation in a robust stakeholder consultation process that is representative, transparent, and accountable.

The withdrawal of the Draft Police Bill 2020 and the Draft Market Regulations were topics that emerged in the conversations.

Under economic security, they called for the introduction of legislative and policy reforms to  innovate viable national and local economic activities for women and women’s organisations to meet the ongoing economic challenges, restore jobs, provide sustainable and resilient income sources, provide state assistance to women cane farmers and women’s  access to lease ownership to elevate their economic opportunities as well as to address their food security challenges.

They also called for the development of meaningful policies for community-based disaster risk resilience, women market vendors and other community based policies that would safeguard rural women’s human security.

Included too was the call on the Fijian Government to end the 11pm-4am curfew to enable women to maximise their economic activities during this period.

femLINKpacific like other women’s organisations and civil society are making submissions to the Fijian Government in their Women in Leadership policy convenings.