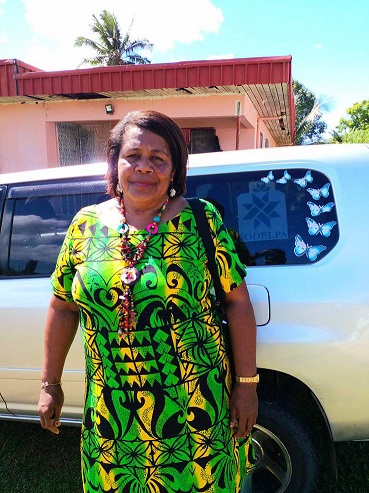 Ana Naivou believes her 26 years of experience as a teacher and the challenges she faced while growing up in Nailuva, Saivou, Ra has provided her with the experience she needs to venture into politics.

The 55-year-old says it is her political ambition to be of service to the people of Fiji and she intends to do just that when she stands as a provisional candidate for the 2022 General Election under the Social Democratic Liberal Party (SODELPA) banner.

Ms Naivou said she intends to pay more than lip service to her promise of service.

“I will go down to the people and hear their cries, celebrate their triumphs, understand their struggles, and discuss with them, their hopes, and dreams — and together we will pave the way forward,” she said.

The eldest daughter of 10 siblings said she had a lot to offer the country.

“I know what hardship is like because as a young girl, I used to travel on horseback for three hours to reach the nearest bus shelter to get to school. All the struggles I went through in life has made me the strong woman I am today.”

Ms Naivou said in 1985, at the age of 18, she qualified for and started studies at Corpus Christi Teachers College where she graduated in 1987.

Ms Naivou said the political upheaval caused by the 1987 coup has had a lasting impact on her.

“I was one of the people who tried to protect some vulnerable Indian (Fijians of Indian descent) women during the cruel events of 1987, it is part of our history but I can still clearly remember what happened and will never trust those that masterminded the coup.”

Ms Naivou said a brave and honest narrative must be accepted and understood by Fijian society today about what had happened in the past.

She said the onus was on political parties to find solutions built upon strong foundations upon which the nation could move forward into a future of peace, political stability, and prosperity.

“That is what I believe and I understand the contributing factors from all sides that led to the ethnic tensions over the centuries, resulting in polarisation until the present day.”

Ms Naivou said SODELPA stood for everything that she believes in.

“A party for the people and by the people with no involvement in the military coups of our times.

“I believe in democracy and transparency.

“When the indigenous people of this country are safe, satisfied and protected, all other races will live in peace and harmony as one nation and truly free unlike at present where certain segments of the population are scientifically identified as vulnerable.

“SODELPA understands these statistical truths and preaches that harmonious co-existence between all the peoples of Fiji can be realised once Government seriously tackles the problem of poverty and disparity in our beloved country.”