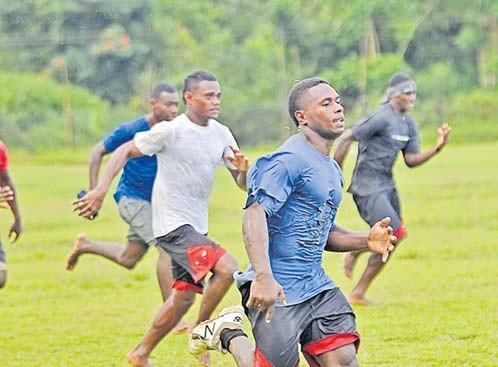 Nineteen-year-old Naitasiri Secondary School (NSS) under-19 player, Sakaraia Soqonakalou was recognized as the best player in the Southern Zone U19 final against Nasinu Secondary School, running out at inside centre.

With many comparing his style of play to that of his cousin, former French international Virimi Vakatawa.

The young man from Naluwai village in Naitasiri said he would not be recognized as the best player last week if it was not for God’s guidance and provision over his life.

“Firstly, I would like to thank God for giving me the talent to showcase what I can do best, and that is to play rugby,” said Soqonakalou.

“Being recognized as the best player in the Southern Zone final was a massive achievement for me and I owe it all to God.”

Soqonakalou aspires to follow the footsteps of his cousin who has made a name for himself in the sport of rugby, representing France in the Rugby World Cup in both 7s.

“I want to follow in my cousin Virimi’s footsteps as he has made a name for himself and has made us proud family members when we watch him play internationally. When he (Vakatawa) comes for holiday, he urges all the youth to train hard and play well and not limit our talents to playing in local competitions. He tells us that the world has endless possibilities and we should work hard for our parents and families who struggle to send us to school and support us in rugby. Those words hit me and I will play to the best of my abilities to give my family a better life if that is what God has planned for me.”

He began playing the sport of rugby at the age of 9 for Rara District School just near their village and is now setting his sights on a professional career in France, but he never forgets his upbringing and acknowledged his parents for their support towards him. ave a roof over my head and provide food for me and for always keeping me in their prayers. They are my “Why” and I would like top repay them by being a professional rugby player.”

NSS take on Lelean Memorial School this Saturday in the Vodafone Secondary Schools Dean U19 national quarter finals at Buckhurst ground at 1.30pm and Soqoakalou is a sure bolster to feature prominently again for his school at number 12.