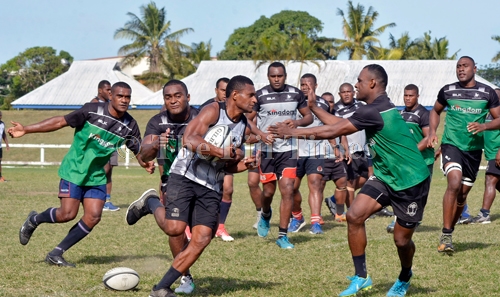 THE loyalty of the players for their province and the pride of donning the white jumper are the two determining factors which have branded Nadroga as the champions of Fiji rugby.

The BLK Stallions take on Suva in the Skipper Cup final at the ANZ Stadium this afternoon. Franck Boivert, the former Fiji Rugby Union coaching director, who had been working behind the scenes as Nadroga’s technical adviser said despite the big turnover of players in recent years, the side had a solid development program in grooming players with a pathway into the senior side and beyond.

Boivert said a unique feature about Nadroga was their free flowing blend of rugby from any part of the field.

“The special thing about Nadroga rugby is the loyalty of the players for the province and the team,” he said.

“They play with a lot of pride when they wear the Nadroga jersey.

“There has been a big turnover of players in Nadroga for the past seven years. Many have secured overseas contracts.

“Right now we have a squad which has been through the system so they know what to expect from the coaches.”

Nadroga defeated Suva 28-26 during the round robin competition earlier in the year. In the semi-final last week, Nadroga thrashed Naitasiri 52-19 while Suva defeated Namosi 26-20.

Boivert said Suva would pose a threat to Nadroga.

“When it comes to the final, it is always a 50-50 chance,” he said. “I think it will be a very good challenge for Nadroga. Suva is a team that moves the ball very well around the park. They have great mobility. Their defence is strong and also have attacking players.”

Nadroga Rugby Union president Tiko Matawalu will be aiming to achieve another milestone with a victory against Suva.

Matawalu took up the union’s leadership in 2013 and became the first person to win the provincial championship as a player, captain and president in the same year.

Since then, Nadroga has won the title each year. Matawalu said the round robin fixture against Suva this season was a close call.

“For Suva this time, we have planned something different,” Matawalu said. The match will kick off at 3pm.