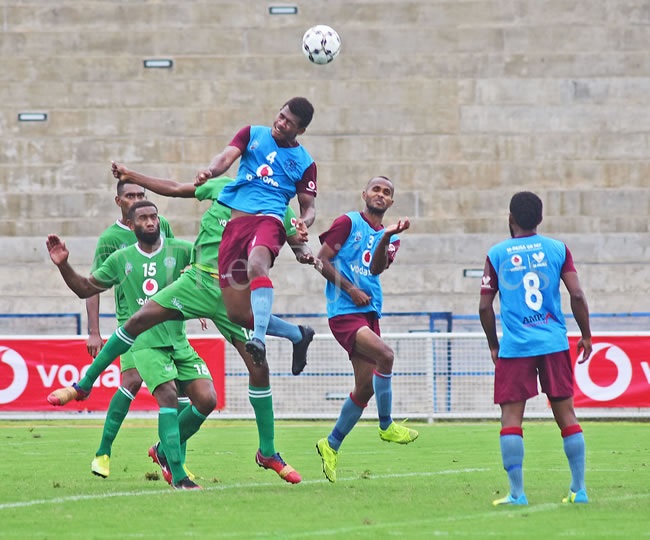 A Nasinu player climbs high for the ball against Nadi during their VPL fi xture at the ANZ Stadium yesterday. Picture: JONA KONATACI

The Nadi football team changed its pace in the second-half to beat Nasinu 3-1 in the Vodafone Premier League fixture at the ANZ Stadium in Suva yesterday.

The Kamal Swamy-coached side scored its first goal through Rusiate Matarerega in the 40th minute to lead Nasinu 1-0 at the break.

Swamy knew his opponents’ weaknesses and switched his attacking play format and changing a gear higher to give them two more goals.

“During the break, I told them about their pace of play and they needed to increase it because it suits them and their speed,” said Swamy.

“After Mereke’s goal, I realised we needed to play smart football, so I used our fast attackers that led to two more goals.”

Matererega scored another goal to boost the Nadi team’s performance and then Napolioni Qasevakatini sealed the deal for the Jetsetters.

Nadi lost in the last round to Rewa 2-1 but Swamy and his boys are building the momentum and combination towards the Courts Inter District Championship next month.

“We have a very tough pool in the IDC and we will not underestimate any team but I am working on the right combination and getting in some old players.”