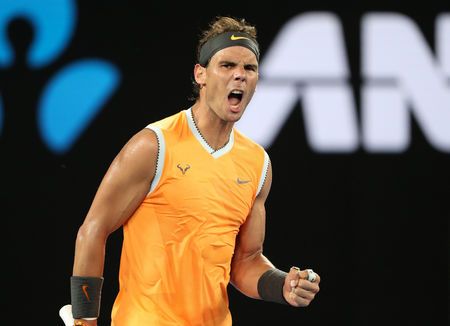 MELBOURNE (Reuters) – Rafa Nadal ended Stefanos Tsitsipas’s trailblazing run at the Australian Open on Thursday, serving up a semi-final masterclass to blitz the 20-year-old Greek 6-2 6-4 6-0 and reach his fifth final at Melbourne Park.

Staging a clinic under the lights at Rod Laver Arena, the Spanish second seed tamed the Tsitsipas serve and racked up 28 sparkling winners against the man who knocked out double defending champion Roger Federer in the fourth round.

After roaring to a 5-0 lead in the final set, Nadal closed out the match with a huge serve in one hour and 46 minutes leaving Tsitsipas to beat a quick exit from the stadium.

Nadal, the 2009 champion, will face either top seed Novak Djokovic or 28th-seeded Frenchman Lucas Pouille in the final as he bids for a second Melbourne title and an 18th Grand Slam crown.

Having withdrawn from the Brisbane International leadup tournament with a thigh strain, Nadal was thrilled with his tennis and fitness at Melbourne Park, where last year he retired hurt in the quarter-finals.

“It has been a great match, a great tournament, I think I’ve played very well every day,” the 32-year-old said in his courtside interview after a pumped-up celebration.

“After a lot of months without playing, probably this court, this crowd gives me unbelievable energy. At that moment (in Brisbane), it was very difficult to imagine I would be here.”

It was also difficult to imagine his opponent would have been Tsitsipas, who had shocked some of the Tour’s most seasoned campaigners to become his country’s first Grand Slam semi-finalist.

Melbourne’s huge Greek community was out in force, with hundreds chanting his name in the grounds outside the stadium.

Nadal simply let his racket do the talking, and he pounded a forehand deep into the corner to break the shaggy-haired tyro in the third game.

The lefthander threw down the hammer, claiming the Greek’s serve for a second time to lead 5-2, with a delicate backhand pass down the line that left Tsitsipas stumbling.

The set was over in a dizzying 31 minutes as Nadal moved in to the net to fire a volley past his opponent.

Given no time to settle, the Greek threw caution to the wind in the second set and began swinging hard in a series of breathtaking rallies.

Reveling in the full-blooded contest, Nadal returned fire and earned three break points with a searing backhand passing shot that clipped the net and bounced in.

The Greek saved them all with a sparkling serve-volley assault before thrashing an ace into the corner to hold.

Nadal pushed again at 4-4, lunging to return a huge serve down the ‘T’ that a net-bound Tsitsipas could only half-volley into the net.

A ballkid got caught in the crossfire as Tsitsipas walked to the net between points. He hit a ball in frustration and accidentally clipped the scampering girl with his racket.

In a trice, he was three set points in arrears, and Nadal bashed a fierce, fizzing serve wide to storm into the final stanza.

There was simply no stopping the hard-charging Spaniard, whose backhand was firing like a double-handed bazooka.

He struck a ferocious cross-court winner to break Tsitsipas in the opening game and took the shell-shocked Greek’s serve again with an overhead smash.

Against the run of play, he grabbed a break point at 5-0 down but Nadal quickly cut off the threat to reach his first Melbourne final since losing to Federer in a classic 2017 decider.

Tsitsipas came into this post-match media conference rubbing his eyes as if he having woken up from a nightmare.

“Honestly I have no idea what I can take from that match,” he mumbled. “I feel happy with my performance in this tournament but at the same time I feel disappointed.”