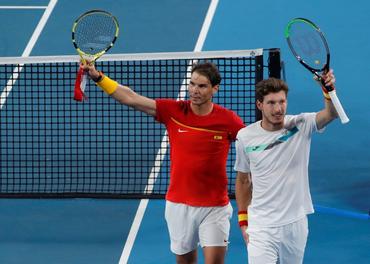 SYDNEY (Reuters) – World number one Rafael Nadal recovered from an upset loss against Belgium’s David Goffin to win the deciding doubles match and send Spain into the semi-final of the ATP Cup teams event in Sydney in the early hours of Saturday.

Nadal partnered with Pablo Carreno Busta to win the high stakes decider 6-7(7) 7-5 10-7 against doubles specialists Sander Gille and Joran Vliegen after Spain and Belgium split the singles results earlier in the evening.

Nadal said it had been a difficult day playing in humid conditions in Sydney after an onerous tournament schedule meant the Spanish team had played its early matches on the other side of the continent in Perth.

“For me I was suffering a lot physically today,” Nadal said shortly after winning the extended tiebreak that is used in place of a deciding third set at doubles matches at the ATP Cup.

“I was sweating a lot and lost my energy.”

While mainly known for his singles success, which includes 19 grand slams, Nadal is a capable doubles player, having won the doubles Olympic Games gold at the 2016 Rio de Janeiro event.

He only had minutes to prepare for the decider after losing his singles match against Goffin 6-4 7-6(3).

Goffin’s impressive victory was built on the Belgian’s attacking baseline game, where he proved to be one of the few players who can stand up to Nadal’s heavy spin.

The pair have now played six times and despite trailing Nadal in their head-to-head 4-2, Goffin has won both times they have played on hard courts.

“I have to take the ball early to use the power of Rafa to play fast and make him run a lot,” Goffin said after the match, played on the Sydney arena’s blue plexicushion hard court.

Nadal appeared distressed during the match, which he later explained was due to a difficult schedule and hot Sydney day where temperatures reached 35 Celsius (95 Fahrenheit).