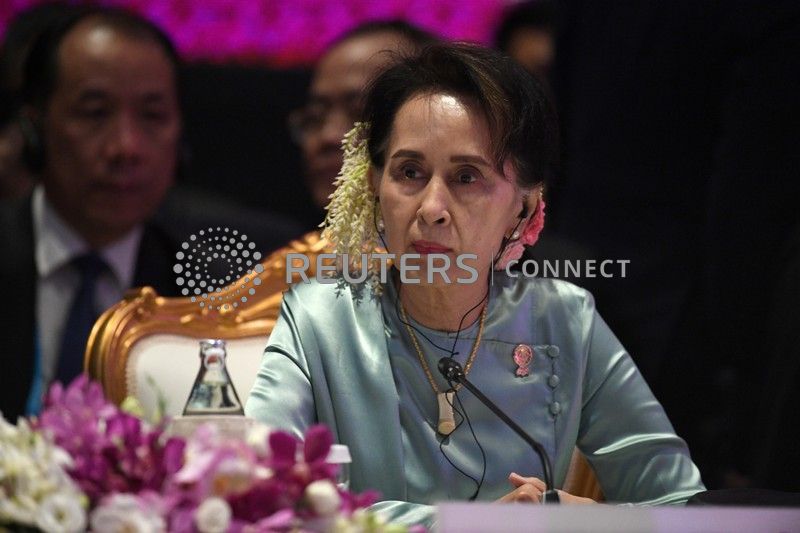 The cases are the latest of a series brought against elected leader Suu Kyi, 75, whose overthrow in a Feb. 1 coup has plunged Myanmar into chaos, with daily protests and strikes and unrest in far-flung regions that anti-junta militias said had claimed the lives of 37 soldiers on Thursday.

Junta-controlled media quoted the Anti-Corruption Commission as saying the new cases against Suu Kyi were related to misuse of land for the charitable Daw Khin Kyi Foundation, which she chaired and illegally accepting $600,000 and 11.4 kgs of gold.

“She was found guilty of committing corruption using her rank. So she was charged under Anti-Corruption Law section 55,” said the junta’s mouthpiece, the Global New Light of Myanmar.

Violations of that law are punishable by up to 15 years in prison.

The lead lawyer for Suu Kyi said that as far as he was aware the corruption investigations were continuing and were not before any court.

He described the accusations as “absurd”.

The Daw Khin Kyi Foundation was set up in the name of Suu Kyi’s late mother to help develop education, health and welfare in Myanmar, one of Asia’s poorest countries.

The army says it took power by force because Suu Kyi’s party cheated in November elections, an accusation rejected by the previous election commission and international monitors.

The diplomatic effort to find a way out of Myanmar’s crisis has yet to bear fruit, with Japan Foreign Minister Motegi Toshimitsu the latest to urge implementation of a five-point consensus reached by Southeast Asian leaders in April, centred on multi-party dialogue and ending violence

The United Nations, Western countries and China all back the Southeast Asian effort to mediate in the crisis, but the junta has paid little heed to that and instead touted the progress of its own five-step plan towards a new election.

But the army has failed to establish control, with peaceful and violent resistance paralysing the economy and guerrilla attacks on security forces in borderlands met by artillery and airstrikes, including in civilian areas.

Fighting has raged between the military and newly formed People’s Defence Forces, one of which on Thursday said it had killed 17 government soldiers in a battle in Chin State, bordering India.

Another, the Chinland Defence Force, on its Facebook page said its fighters had also killed 10 troops near Hakha and issued a demand to the junta to release all people detained in Chin State, or face a stronger backlash.

Reuters is unable to independently verify the claims and a military spokesman did not respond to calls seeking comment. State-run MRTV made no mention of the incidents in its nightly newscast.

Fighting in northeast and northwest of Myanmar has forced more than 100,000 people to flee, according to the United Nations, some to the Indian states of Mizoram, Manipur and Nagaland, where authorities fear pro-democracy fighters may have joined refugees.

Separately on Thursday, a military plane crashed near Myanmar’s second-biggest city of Mandalay, killing 12 people, the city’s fire service said. There was no immediate indication that the crash was related to the crisis.