My 5 years in Fiji 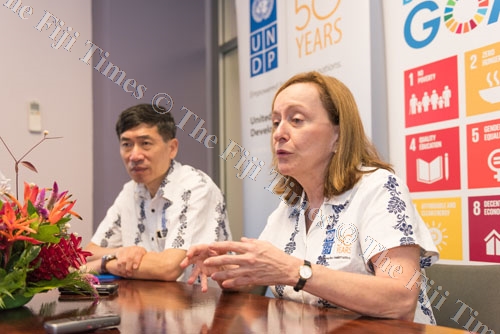 We are supporting 14 Pacific Island Countries and Territories in their quest to reach the Sustainable Development Goals of the Universal Agenda 2030 on Sustainable Development.
Suva remains an important regional hub for United Nations support, and I hope it can grow even more through the UN secretary-general’s reform efforts to make the UN work more for the people.

The United Nations has over 840 staff in the Pacific, of which more than 400 work in Fiji (with over 270 national staff).
As you can imagine from these numbers, I might be none the wiser, but I’ve had a fantastic five years in this country and this region.
I have met many incredible, amazing people and I have gained a real appreciation of the Pacific, the Blue and the Green; with all its ups and downs; its challenges and opportunities; its vastness and its smallness; and its unbelievable beauty.
A special place is held in my heart, of course, for Fiji.

Fiji has been my home and place of retreat, especially when coming home from my many work-related travels, near and far. The upcoming elections in Fiji remind me of the time when I arrived in this beautiful country in 2014.
There was much excitement in the air as the country was gearing up under a new constitution for its first elections since 2006.
I recall that at the time, I sent a message on the occasion of the International Day of Peace, just after the elections, describing how I felt heartened to have seen so many Fijians, old and young, committed to play their part in shepherding Fiji back to democracy.
Voter turnout was fantastic, and I am sure Fijians will again cast their vote in at least as high numbers this time around.
At the time, I appealed to the country’s leadership and to the new Parliament to cherish the political competition but also to thrive through collaboration.
Since then, much has been achieved, both nationally and internationally, and this should be applauded. I am especially impressed by how Parliament has developed as a venue for lively and public debates — the Speaker may say on occasion, a little too lively!
I am proud that the United Nations helped build Parliament capacity over the years. The important Parliament committee work is thriving, receiving
contributions from citizens and other stakeholders, with members of Parliament from all sides analysing draft Bills. And I really enjoyed the Speaker’s public debates on key issues facing Fiji with participation from the private sector, labor unions and academia.

Moreover, strides have been made with the help of the United Nations in bringing greater access to justice services to the people, especially in remote
areas.
Of course, much still needs to be done (like in any other democracy).
As we all know, there is no “silver bullet” that keeps everyone happy, healthy and feeling heard. However, from my many years working in support
of governments and institutions around the world, I believe that there are three principles that can work “magic” in any democracy.
These are trust; hard work; and believing in the power of women. If Fijians trust each other; and keep talking to each other — men and women alike; creating and finding safe spaces to discuss their issues; and work hard: I am certain that there is no limit in what Fiji can achieve, whether it
is lifting up its own people or internationally, pushing for action against climate change and for ocean health.
Building this trust cannot happen overnight.

As the Supervisor of Elections recently said in the media, “having a good amount of trust is very healthy for the country”, but that the trust factor
for the voters here was lower than in some other countries, as Fiji has had only one election since 2006.

Part of the trust building process is creating open and safe spaces to talk to each other, outside of the politics of the day.

It also takes patience, frankness, and time. And it takes the boldness to go beyond the ethnic divide and talk about issues, how we experience
them perhaps differently, and how we can overcome these issues together, not divided.

This is an area where the United Nations has a lot of experience globally, and I’m sure that there could be many ways of working together
in this area, also after my departure.

The United Nations has been supporting the strengthening of Fiji’s key institutions, in line with the country’s National Development Strategy, with other international partners.

Of course, we hope that these institutions will become even stronger over time, as Fiji has been striving towards fulfilling the international
norms and standards that it has committed to.

The recent visit of the UN High Commissioner for Human Rights brought into focus this need for strong institutions.

From the United Nations perspective, I wish to emphasise that we strongly believe in free speech.

However, there is no justification for hate speech, threats or intimidation in social media, or in any media for that matter. With Fiji in an election year, it is especially important to recall that the right to freedom of opinion and expression and the prohibition of incitement to hatred are mutually
supportive principles, given that open public debate of ideas, in addition to interfaith and intercultural dialogue, can be the best
antidote to hate and intolerance.

The United Nations has been accompanying Fiji’s democratic development and the people are the judge of whether we have done Fiji well (and keeping in mind, our motto is, we can always do better).

I am impressed how more and more women come forward in very difficult circumstances pressing for an end to the pervasive violence and abuse
against women and children in this country and the region.

And I applaud the men that are joining this fight, and the groups that have been building strong networks of support.

In this vein, I am pleased that more and more women are standing for elections and are a loud and clear voice in Fiji’s politics, which is inspiring
others to also join in.
This auspicious year is also an opportunity for Fiji to continue to reinforce the region joining up forces for development and peace, just like it has done as the Chair of COP23.

Soon, the leaders of the Pacific Islands Forum will be discussing an expanded and strengthened security framework for the Pacific with its unique needs and locally rooted solutions.
Fiji’s role will be instrumental for the success of this process.
Through its 40 years of peacekeeping work and sacrifices in many difficult and challenging political environments, Fiji has experienced first-hand the meaning of the concept of “sustaining peace” that the United Nations has recently adopted as its international rallying cry.

That is, building peace is only possible through a joint interplay of the three pillars that the United Nations are built on: security and stability, sustainable development, and human rights.

Looking back at a truly exciting and eventful five years in Fiji and the region, I realise that we have overcome a lot of challenges, including those of Cyclone Winston and other cyclones before and after that, which brought much sorrow and harm, but could not destroy our spirit. It is this
kind of co-operation, faith and hope for a better future that I will miss when I depart for my next assignment very soon.