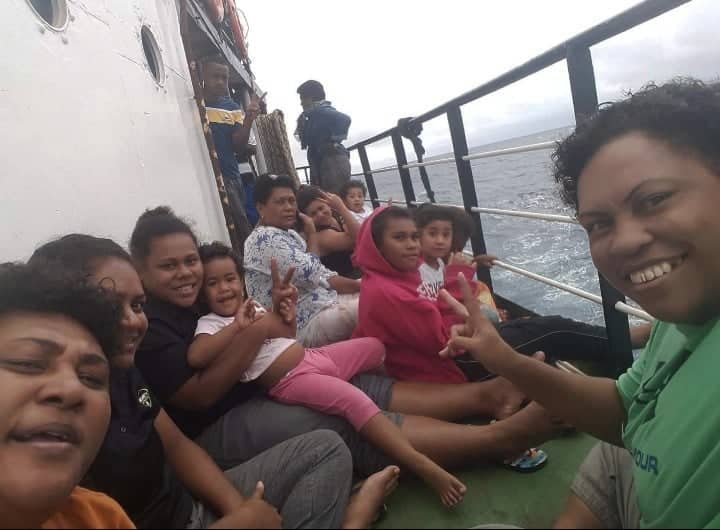 Part of the group from Gau on board the MV Liahona II who were on their way to Dravuni. Picture: SUPPLIED

CLOSE to 30 people with links to Qarani village in Gau, Lomaiviti, will be celebrating the rest of Easter in Dravuni Village, Kadavu, after they were saved from a near-death experience in Kadavu waters.

They were among the 121 passengers who were escorted to safety on board the MV Liahona II after the ramp broke off and fell into the ocean en-route to Kadavu on Thursday night.

Speaking on their behalf, Lavenia Qereqeretabua said it was an experience they would never forget.

She said they were on their way to Dravuni Village to carry out the traditional ceremony of ‘kaumatanigone’ when they met the tragedy.

“We were worried because we were taking with us eight children who were all under the age of five years old,” Ms Qereqeretabua said.

“I started calling for help when I saw what had happened because the water started coming into the vessel.

“We reached Kavala Bay at around 6pm on Friday, spent another night on the vessel before leaving for Dravuni the next day.”

She said they were also accompanied by family members from Europe.

More reports in today’s edition of The Sunday Times.