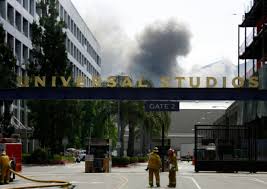 FILE PHOTO: A fire truck and firefighters are seen at Gate 2 of Universal Studios as smoke rises (background) from a fire that rages out of control at the backlot filled with movie sets in Universal City, California June 1, 2008. REUTERS/Fred Prouser/File Photo

LOS ANGELES (Reuters) – Several big-name musicians voiced dismay on Wednesday that some of their recordings may have been among thousands of original masters that The New York Times Magazine reported were lost in the Universal Studios Hollywood backlot fire of 2008.

The blaze, which gutted a popular “King Kong” attraction and a swath of the studio’s fabled outdoor lot, also destroyed nearly all the master recordings stored there in a Universal Music Group archive, a loss that has long gone undisclosed, the magazine reported on Tuesday.

Universal Music estimated in a confidential 2009 report that the loss encompassed about 500,000 song titles, the article said.

In a statement on Wednesday, the company called the incident “deeply unfortunate,” but said the Times story contained “numerous inaccuracies, misleading statements, contradictions and fundamental misunderstandings of the scope of the incident.”

The extent of the loss, documented in litigation and company records the article cited, was largely kept from the public eye through a concerted effort on the part of the music label, the magazine said.

Many of the artists whose own material was reported to have been destroyed expressed shock.

“Oh my Lord … this makes me sick to my stomach,” singer-songwriter Sheryl Crow wrote on Twitter, posted with a link to the article. “And shame on those involved in the coverup.”

The rock band R.E.M said in a Twitter statement that concerned fans were making inquiries. “We are trying to get good information to find out what happened, and the effect on the band’s music, if any,” the group tweeted.

Original sound recordings of many of the greatest names in popular music since the 1940s – from Louis Armstrong and Judy Garland to Tom Petty and 50 Cent – are believed to have gone up in smoke in what the article described as “the biggest disaster in the history of the music business.”

Master recordings are typically owned and controlled by the music labels for the artists in their catalog. But they are seen as vital to musicians’ legacy as they are original, one-of-a-kind recordings considered the truest representation of sounds captured in the studio.

Masters are the source material for all reproductions, including re-releases and remixes, made for distribution, whether on digital medium or vinyl.

The New York Times article “ignores the tens of thousands of back catalog recordings that we have already issued in recent years, including master-quality, high-resolution, audiophile versions of many records that the story claims were ‘destroyed,’” Universal Music said.

Irving Azoff, manager for the group Steely Dan, said in a statement that the musicians had “been aware of ‘missing’ original Steely Dan tapes for a long time now.”

“We’ve never been given a plausible explanation,” Azoff said. “Maybe they burned up in the big fire. In any case, it’s certainly a lost treasure.”

Krist Novoselic, a founding member of the 1990s grunge band Nirvana, responded to a fan on Twitter asking whether the Times article meant that the masters for the group’s landmark “Nevermind” album were gone. He wrote: “I think they are gone forever.”