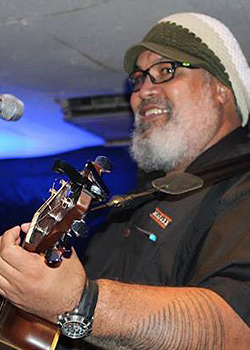 Bigwilz will feature in the Playing for Change Fiji. Picture: FT FILE

WHILE thousands of Fijians will be glued to their television sets when the Flying Fijians take on the Wallabies today, another group of Fijians will also be creating history in Raiwaqa but on a different platform.

Fijian musicians and vocalists will join a worldwide movement designed to inspire and connect people of all cultures, social status, faiths and ethnicities in the global music phenomenon called ‘Playing For Change’.

Playing For Change Fiji ambassador Naleen Nageshwar said the event would mean that Fijian singers and musicians would perform on the same platform that had seen the likes of Jack Johnson, Bono, Keith Richards, Jimmy Buffett, David Crosby and The Doobie Brothers to name but a few.

Fijian artists featured in the event which will also be broadcast live on Fiji One include One2Eight, Dau, Tux and Bigwilz and Phil Dakei of Makare fame.

“With Fiji’s time-zone being ahead of the rest of the world, today’s Raiwaqa-Raiwai event will essentially kickoff PFC Day around the world,” Nageshwar said.

“That’s just hours before our beloved Flying Fijians take on the Australian Wallabies at the Rugby World Cup.

“The game features no less than three Fijian superstars in the Aussie lineup.

“What a way to bring on the evening action. There’s already talk about kava gatherings, and Beer-n-Chaser parties with some of Fiji’s best musicians, past and present, coming live into lounge rooms and garages throughout the nation, as we prime up for the rugby.”