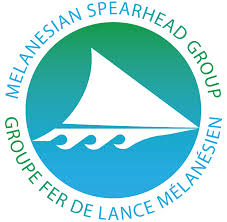 PORT VILA, 30 JUNE 2019 (VANUATU DAILY POST) – Members of the Melanesian Spearhead Group (MSG) Secretariat met with a team of officials from the Solomon Islands Government Parliamentary Task Force last Thursday as the delegation made a courtesy call while passing through Vanuatu.

The Parliamentary Task Force that was set up by the new Solomon Islands Government to look at the Taiwan/PRC issue are currently visiting selected Forum member countries, Vanuatu, Samoa, Tonga, Fiji and Papua New Guinea learning more about their one China Policy and its implementation.

MSG Deputy Director General (DG) Peter Eafeare, spoke to the delegation comprising of six members of the Solomon Islands Parliament, five being new Members and two Government Officials on the important role and functions of the Melanesian Spearhead Group in the Pacific region.

Solomon Islands Member of Parliament, John Moffat Fugui expressed his gratitude on behalf of the delegation after the presentation, thanking the MSG Deputy DG and MSG Secretariat members for their time and hospitality.

The delegation will be in Vanuatu from 25-28 June 2019 where they will also meet with Vanuatu Government Officials before leaving for the other Forum countries.