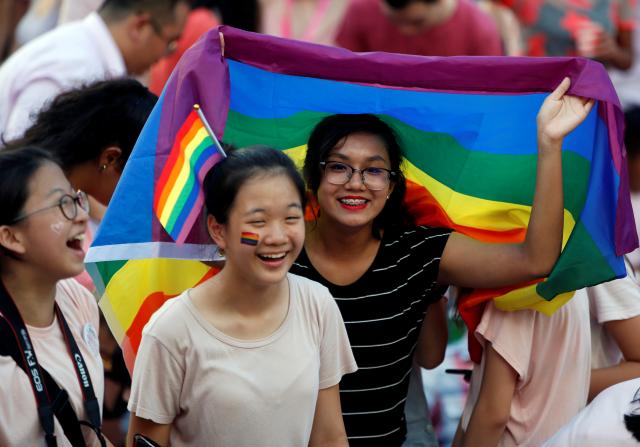 SINGAPORE (Reuters) – A slim majority of Singaporeans still support a law that bans gay sex, an online survey showed on Monday, amid renewed debate on whether the city-state should follow India’s footsteps and scrap similar British colonial-era legislation.

Previous legal challenges to overturn the ban failed but a prominent Singapore diplomat called on the gay community to renew legal action against the law, a day after India’s top court decriminalized gay sex in a landmark ruling.

The Ipsos poll 12 per cent opposed the law, while 33 per cent were neither for or against it.

Ipsos conducted the online poll of people aged between 15-65 years over four days in late July and early August.

Under Section 377A of Singapore’s Penal Code, a man found to have committed an act of “gross indecency” with another man could be jailed for up to two years, although prosecutions are rare. The law does not apply to homosexual acts between women.

During its six decades since independence, Singapore has emerged as a modern, wealthy city state.

Yet, lawmakers remain typically cautious over social reforms, partly due to sensitivities stemming from the ethnic and religious mix among Singapore’s 5.6 million inhabitants – a population that includes citizens, permanent residents and foreigners

An Ipsos spokeswoman said its survey had not been commissioned, but was undertaken to mark the 10th anniversary of Singapore’s annual LGBT pride parade, Pink Dot, an event that draws thousands of people.

Last week, Tommy Koh, a veteran diplomat and lawyer, called on the Singapore gay community to bring a class action and challenge the law.

Home Affairs and Law Minister K. Shanmugam said the issue was up to the Singapore society to decide but the majority of Singaporeans were opposed to any change to the law, adding that “a growing minority want it to be repealed.”

“As has occurred in other countries globally, increased dialogue regarding same-sex relationships has contributed to higher acceptance among Singaporeans,” McPhedran added.

Prime Minister Lee Hsien Loong has previously said that Singapore society “is not that liberal on these matters”.