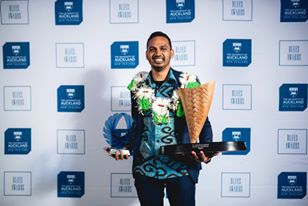 Sivendra Michael with his University of Auckland 2019 Blues Awards, the Major Pasifika Award and the Most Outstanding Contribution in Service and Leadership Award. Picture: SUPPLIED

FROM somewhat being a mischievous child who swam with friends in floodwaters and rain-bathed during the cyclone to now being a climate warrior advocating on the devastating impacts of such disaster, Sivendra Michael stands true to his calling.

The Waiyavi, Lautoka, kid is now at the forefront of fighting climate change and continues to make an impact where he lives in Auckland, New Zealand and around the world.

Sivendra is one of the University of Auckland’s 2019 Blues Award winners.

He was awarded the Major Pasifika Award and the Most Outstanding Contribution in Service and Leadership Award last month.

“I was truly surprised when my name was called as we had so many outstanding individuals that did amazing projects for their communities,” he said.

“I did not think for a second that I was going to be given the overall award. I had no idea what was in the nomination and also during the ceremony I was reading about the inspiring work of so many other people there.

“I am grateful to the organisations (Splice, The Cause Initiative, E Square and iTaukei Trust Fund) in New Zealand and Fiji that had put my name forward.”

He said his calling was to serve his Pacific communities.

“I will always reach out in whatever way I can and always give back,” he said.

“Being recognised for the work sends a strong message of appreciation and also motivates other students including myself that we must continue to be driven by our passion and values.

“I dedicate both the awards to the people of the Pacific and to all those amazing change makers, movers and shapers in the Pacific that walk the talk and embrace the mana for their people.

“When accepting the award, I shared to the audience that this award belongs to all of those that recognise and stand-up for their people especially those that took the streets the very same afternoon of the awards ceremony and lost their voice demanding for justice.”

He said he never thought he would be doing his PhD or pursue studying abroad.

“However, I knew I wanted to make my community proud and all that scolding of getting an education rings in my ears when I am presented with the opportunity to go a step further,” he said.

“I will never forget the stories of my grandparents, aunties and uncles. They always told me that my dad, who always finished first in the class, had to sell boiled eggs to send his other siblings to school and he himself dropped out in Class 7.

“He went on to be a successful small business owner in the late 1990s after working in many different jobs. When the going got tough, he went out of his way to ensure we went to school, even if that meant my sisters were to be carried to school when they did not have bus fare.

“I was not born to see all of this, but their stories of staying in housing blocks, their challenges meant so much to me and I sometimes cry when reflecting on their struggles.

“It may be an ordinary story in today’s world as there are many other families in Fiji that can resonate with what I am sharing — but personally these are the stories I reflect on to keep pushing on.”

Sivendra, the youngest of five siblings, said he was always pampered despite the many hardships that his parents had gone through to provide for him and his siblings.

“Personally, I acknowledge the many families in my community Waiyavi that have always reached out to help my family,” he said.

“I am proud to say that I am a product of the many families (the Bucknells, the Hughes, the Kolinisaus, the Manuelis, the Chands, the Frasers and the Beddoes family) that considered me their own son, loved me for who I was and cared for my family and I during the most difficult times in life.