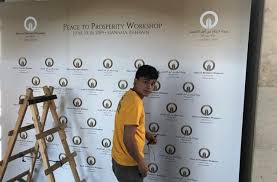 A worker places a banner at the pavilion where the U.S. hosted event "Peace to Prosperity" takes place outside Four Seasons Hotel in Manama, Bahrain, June 24, 2019. REUTERS/Matt Spetalnick

RABAT (Reuters) – Morocco’s foreign ministry said on Monday that a member of the ministry of economy and finance will represent the country at a conference this week in Bahrain on the administration of U.S. President Donald Trump’s Middle East Plan.The foreign ministry did not offer further details on the identity of the finance ministry staff member, but said the kingdom remains attached to the two-state solution. On Sunday, thousands protested in the streets of Rabat expressing rejection of the Middle East peace plan.