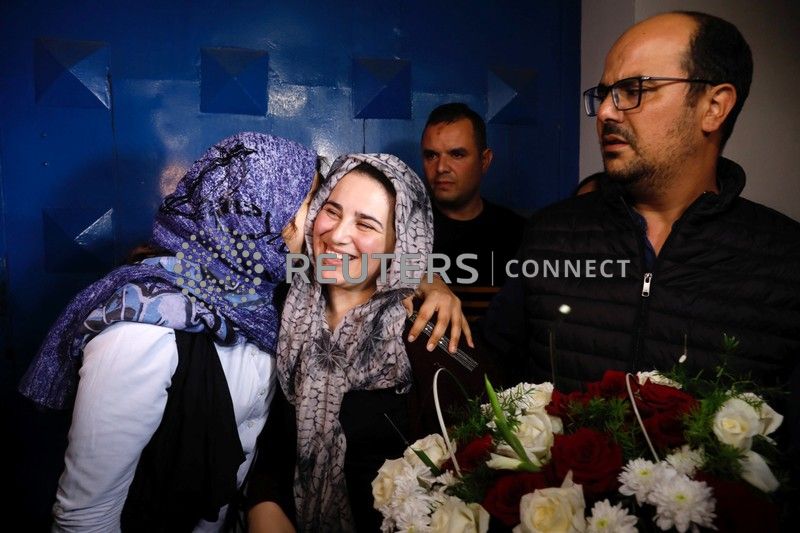 Moroccan journalist Hajar Raissouni is greeted by her relatives as she leaves the prison in Sale, near the capital Rabat, Morocco October 16, 2019. REUTERS/Stringer

RABAT (Reuters) – Morocco’s king has pardoned Hajar Raissouni, a journalist sentenced to a year in prison last month for extramarital sex and an abortion, along with her fiance, a doctor and two of his colleagues, the justice ministry said on Wednesday.

The case of Raissouni, who had denied the charges against her, outraged human rights activists who said she had been targeted for her work for a newspaper that has criticised the state, and because she is the niece of a prominent Islamist.

The Justice Ministry described King Mohammed VI’s intervention in the case as “an act of compassion and mercy”, adding that Raissouni and her fiance had wanted to establish a family legally.

The case drew widespread criticism from both Moroccan and foreign rights activists, who painted it as an attack on the free press and on civil rights.

Extramarital sex and abortion are illegal in Morocco, a mostly orthodox Muslim country.

However, the Moroccan Association for Abortion Rights, an activist group, said 600 to 800 abortions take place illegally each day. In 2018, 41 cases were brought over illegal abortions, according to a report released by the prosecutor’s office.

Raissouni, 28, works for Akhbar al-Youm, an independent newspaper that has been critical of the Moroccan state, and is the niece of a Muslim theologian who is a former leader of a politically influential Islamist group.

Raissouni said police had taken her for forcible medical checks against her will and had asked her about her work at the newspaper and about her uncles.

Her lawyers and rights activists said the checks without her consent amounted to torture.

In court, the prosecutor dismissed any suggestion of procedural irregularities, and said that the circumstances of Raissouni’s arrest had been legal and the case had nothing to do with her work as a journalist.

Raissouni and her fiance had said in court that they had been married in a religious ceremony but had not yet arranged a legal marriage contract.

Police had said they detained her as she was leaving a clinic they were investigating for abortions.

She and the doctor said she was there to receive treatment for a blood clot and denied that she had had an abortion.