More than 40,000 march in Vienna against coronavirus lockdown 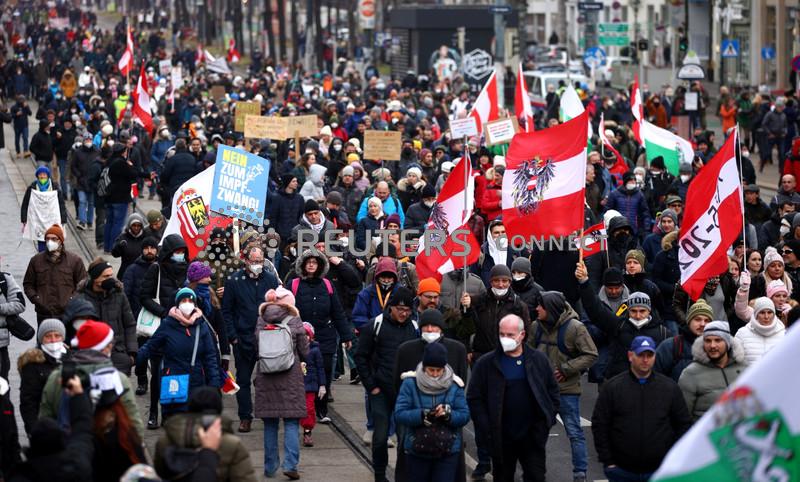 Demonstrators hold flags and placards as they march to protest against the coronavirus disease (COVID-19) restrictions and the mandatory vaccination in Vienna, Austria, December 4, 2021. REUTERS/Lisi Niesner

VIENNA (Reuters) -More than 40,000 people marched through Vienna on Saturday to protest against a lockdown and plans to make vaccinations compulsory to curb the coronavirus pandemic.

Faced with a surge in infections, the government last month made Austria the first country in Western Europe to reimpose a lockdown and said it would make vaccinations mandatory from February.

People carried signs saying: “I will decide for myself”, “Make Austria Great Again”, and “New Elections” – a nod to the political turmoil that has seen three chancellors within two months – as crowds gathered.

“I am here because I am against against forced vaccinations. I am for human rights, and the violation of human rights should be stopped,” one protester told Reuters Television.

“We are protecting our children,” said another.

Around 1,200 police officers deployed to handle scattered protests that merged into a march on the central Ring boulevard.

Police put the size of the protest at over 40,000, while around 1,500 staged counterprotests.

Officers used pepper spray against some protesters who aimed fireworks at police, and detained some marchers, police said.

A parliamentary committee this week approved doubling the length of the lockdown to 20 days, which the government has said is the longest it will last.

New cases have been falling since the start of the lockdown, whose terms make exception for protests.