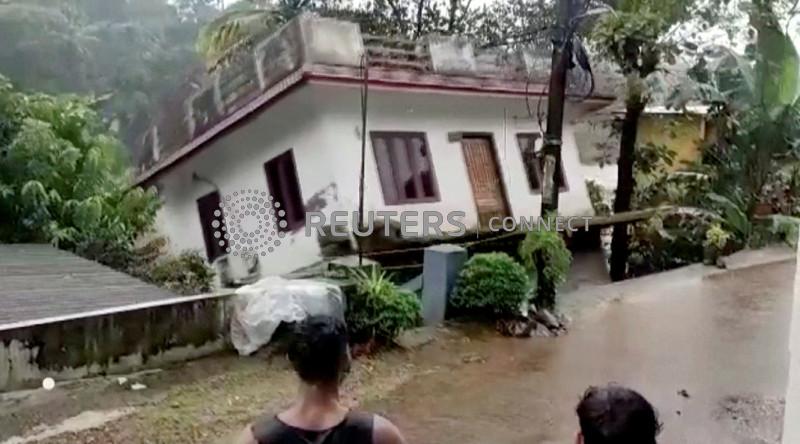 People watch a house being washed away in river due to strong current after heavy rains at Kottayam in Kerala, India, October 17, 2021 in this still image taken from video on October 18, 2021. REUTERS TV/ANI/KERALA GOVERNMENT PUBLIC RELATIONS OFFICE/ HANDOUT via REUTERS

KOCHI, India (Reuters) – Leaders in the southern Indian state of Kerala opened near-overflowing dams on Monday after at least 22 people died when heavy rains lashed the region over the weekend.

Rainfall across Kerala triggered flash floods and landslides in several areas, with the Indian army and navy called out to rescue residents.

Opening dams could reduce the risk of potentially catastrophic overflows like those partly blamed for the state’s worst floods in a century in 2018, when at least 400 people were killed and 200,000 displaced. But by releasing water downstream, areas already experiencing floods could suffer more.

Sheeba George, the top official in Idukki district, told local media that dozens of families had been evacuated from their homes ahead of the dam openings.

At least 13 people were killed by a landslide in the village of Kuttikkal, officials and witnesses said.

“There were four landslides that happened there yesterday, the hill behind me, which brought water and other items downwards,” a local resident told Reuters partner ANI on Sunday, standing in front of a now-barren hillside.

P.K. Jayasree, the top government official in Kottayam district where the landslide took place, said six of the dead were from a single family.

Kerala will receive further widespread rain, including isolated heavy downpours in many areas, for two to three days from Oct. 20, the state government said on Monday.