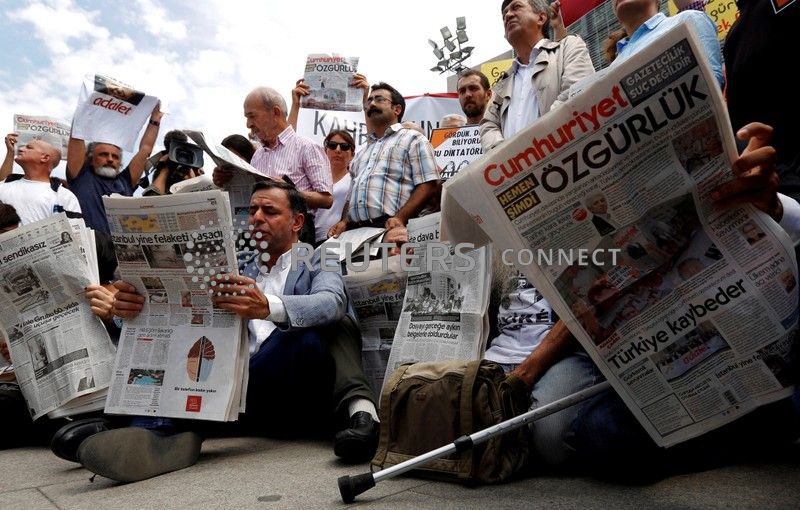 FILE PHOTO: Press freedom activists read opposition newspaper Cumhuriyet during a demonstration in solidarity with the jailed members of the newspaper outside a courthouse, in Istanbul, Turkey, July 28, 2017. REUTERS/Murad Sezer/File Photo

ISTANBUL (Reuters) – More than 120 journalists are still being held in Turkey’s jails, a global record, and the situation of the media in the country has not improved since the lifting of a two-year state of emergency last year, a global press watchdog said on Tuesday.

Turkey declared a state of emergency soon after a failed coup in 2016. It sacked or suspended 150,000 judges, academics, military officers, civil servants and others during the two years it was in force on suspicion of backing a U.S.-based cleric blamed by Ankara for the coup. More than 77,000 people were jailed pending trial.

Hundreds of journalists have faced prosecution since the coup, mainly on terrorism-related charges, the International Press Institute (IPI) said in a new report, adding the number of journalists still in jail had fallen from a high of over 160.

“Behind those figures lies a story of egregious violations of fundamental rights, with dozens of journalists held on the most serious terrorism-related charges for months, sometimes years, pending trial, in many cases without an official indictment,” it said.

Journalists were jailed “as a consequence of an extended, politically motivated crackdown against the media”, the report said, adding that Turkey has been the world’s “undisputed leading jailor of journalists” for almost a decade.

Turkish officials were not immediately available for comment on the report.

The institute said Turkey’s judiciary had been flooded with cases since the coup but had been unable to properly examine them because a third of all judges were among those removed from office due to suspected links to the failed coup.

Ankara says the detentions, sackings and suspensions were necessary to safeguard national security, given that Turkey has faced attacks from Kurdish, Islamist and far-left militants.

Critics say President Tayyip Erdogan used the failed coup as a pretext to clamp down on dissent and strengthen his grip on power, a charge Ankara denies.

Trials against many journalists still continue.

Last week, a Turkish court ordered prominent journalist and author Ahmet Altan back to jail, a week after he was released following a retrial on coup-related charges, in a case condemned by human rights groups and by the IPI.