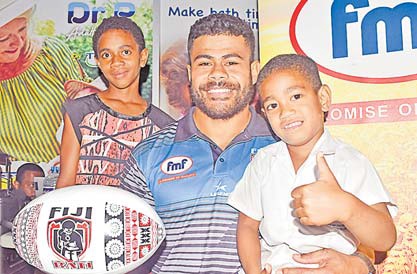 The Flour Mills of Fiji Foods Ltd has jumped onboard as one of the major sponsors of the Vodafone Fiji Bati team to the Rugby League World Cup in England next month.

FMF marketing representative Alana Ah Yuk said they were having roadshows right around the country to promote the Bati in their bid to reach the RLWC final.

“We are one of the major sponsors of the Fiji National Rugby League and the Fiji Bati,” he said. The team was at Extra Supermarket at Laucala Beach in Suva yesterday.

“We are conducting roadshows in the Southern Division to gain support from the public in supporting our Bati team at this year’s RLWC in England. We plan to take this roadshow right around Fiji from the West to the North to generating support system for our heroes who would be playing and representing our tiny island nation at the RLWC.

“We will be giving away free Bati merchandise such as jerseys, sunglasses, knapsacks and rugby balls to customers.