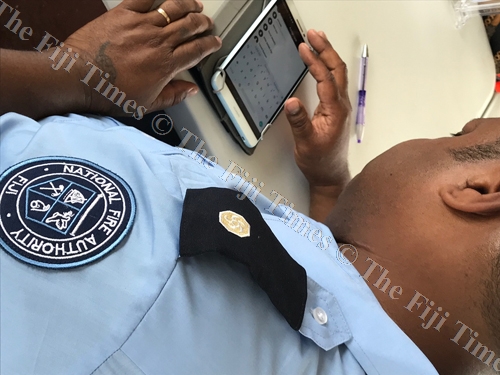 NFA officer uses the geoBing app at the operations centre for the tsunami drill at Veiuto. Picture: SUPPLIED

A mobile app tracking the evacuation of students and teachers during a tsunami drill has provided disaster management officials with real time information from the issuance of the public advisory to their safe arrival at the evacuation sites. The geoBingAn app was introduced for the first time in an emergency response scenario on March 1st 2018 by the Fiji’s National Disaster Management Office (NDMO) during the tsunami drill — an operation which saw the simultaneous evacuation of primary and secondary students from five schools along Suva’s coastline.

The exercise, on March 1, involved 3260 students and 162 teachers from two secondary and three primary schools. NDMO director, Anare Leweniqila, said this was part of their plans to move towards ICT and space based technology adding the app allowed for real time exchange of information.

“To show what the students were doing in terms of how they were coming up in partners and how they were entering the emergency exit areas so that gave us in terms of real time information to have pictures in that kind of operation is satisfying, that you actually see what is being undertaken rather than just relying on voice through the radio telephones that we have and if there was any injuries, the pictures could assist us in terms of assessing what type of injuries were occurring during the conduct of the drill or during an evacuation process.”

Stakeholders, including school managements, government officials from health and education, security forces, municipal council, national fire authority and NDMO staff had a day to familiarise themselves with the new features.

Facilitating the exercise, NDMO consultant, Jiuta Korovulavula, says the use of the app during the tsunami drill allowed the authorities to test the responsiveness from the users and more importantly to demonstrate its importance.

The geoBingAn app is the outcome of a pilot project Applying Space-based Technology and Information and Communication Technology to Strengthen Disaster Resilience Programme.

Implemented in 2016 in Nadi, it aimed to improve our capacity to collect and share reliable data using this technology at local government and community levels to strengthen disaster resilience and support timely post-disaster response, recovery and reconstruction efforts in a cost-effective manner.

The tsunami drill provided the scenario to test the app and receive feedback from stakeholders.

The NDMO director said, “That was the first time we tried it out. “I think it was well received. Just one of the things we wanted to do moving forward is the education part on the use of the app especially with our stakeholders so that once we want to do another simulation or want to do another drill at least we have a lot of people that understand how to operate the app.”

The mobile app is expected to be used in other tsunami drills planned for schools in other parts of Fiji.

The tsunami drill is part of UNDP’s and Japan’s regional project “Strengthening School Preparedness for Tsunamis in the Asia-Pacific region” in 18 Asia-Pacific countries.