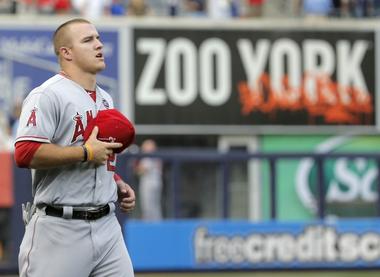 Trout joins a list of players with three-plus MVPs that is headed by Barry Bonds, a seven-time winner. No one else has won more than the three captured by Trout, Albert Pujols, Alex Rodriguez, Mike Schmidt, Mickey Mantle, Yogi Berra, Roy Campanella, Stan Musial, Joe DiMaggio and Jimmie Foxx.

Trout finished in the top two in AL MVP voting for the seventh time in eight full major league seasons. This year, he led the majors with a .438 on-base percentage and the AL with a .645 slugging percentage while batting .291 with 45 homers (second in the AL) and 104 RBIs.

—Gerrit Cole officially became a free agent when he declined a qualifying offer from the Houston Astros. He was one of 10 pending free agents who received qualifying offers of a one-year, $17.8 million contract from their current teams on Nov. 4.

—Smith subsequently signed with the Braves, getting a three-year, $39 million contract in a deal that includes a 2023 club option for $13 million.

Smith struck out 96 batters and walked 21 in 65 1/3 innings, holding opponents to a .196 average. Left-handed hitters batted just .157 against him with two extra-base hits.

Napoli, who hit 267 home runs over 12 seasons with the Los Angeles Angels, Texas Rangers, Boston Red Sox and Cleveland Indians, will become the Cubs’ quality assurance coach under new manager David Ross, according to The Athletic. Napoli and Ross were teammates with the Boston Red Sox in 2013.

Napoli, 38, won a World Series with the Red Sox in 2013 and was on the Indians team that advanced to the World Series in 2016. Cleveland was defeated in that series by the Cubs, the organization Napoli will now join.