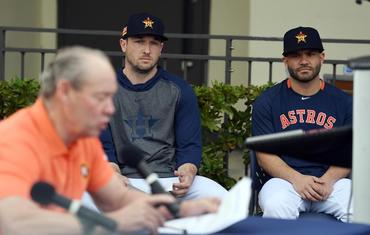 Two of the Houston Astros’ top hitters, third baseman Alex Bregman and second baseman Jose Altuve, issued apologies for their role in a sign-stealing plot that led to the dismissal of manager AJ Hinch and general manager Jeff Luhnow.

“I have some brief remarks I’d like to share with y’all. I’m really sorry about the choices that were made by my team, by the organization and by me,” Bregman said Thursday, with his hands connected at the fingertips reading from a prepared statement. “I’ve learned from this and I hope to regain the trust of baseball fans. I would also like to thank the Astros’ fans for all of their support. We as a team are totally focused on moving forward to the 2020 season.”

Altuve, the 2017 American League MVP, and Bregman spoke for a combined one minute, 24 seconds and did not directly address their role in the scandal.

“We had a great team meeting last night. And I want to say the whole Astros organization and the team feels bad about what happened in 2017,” Altuve said. “We especially feel remorse for the impact on our fans and the game of baseball. Our team is determined to move forward to play with intensity and bring back a championship to Houston in 2020.”

—When New York Yankees left-hander Aroldis Chapman sees the video of Altuve rounding the bases after the series-ending homer in Game 6 of the 2019 American League Championship Series, he wonders if Altuve knew that an off-speed pitch was coming.

As the Astros second baseman neared home plate, he grabbed his shirt and yelled at his teammates not to rip off his jersey. Altuve’s actions have increased speculation that the team’s sign-stealing scandal included the use of wired devices.

“I’ve seen that video,” Chapman said through an interpreter in Tampa, Fla., where Yankees pitchers and catchers are in the early days of spring training. “A lot of people have seen that video. It’s a popular video right now. And yeah, if you look at his actions, they look a little suspicious. At the end of the day, I just don’t know. I can’t tell you if he had the sign or didn’t have the sign — I don’t know. That’s a good question for him and for those guys. I just don’t know.”

The deal reportedly would be finalized if Pillar passes his physical this weekend. Boston’s position players are not required to report to spring training until Sunday.

—Red Sox left-hander Eduardo Rodriguez lost his arbitration case and will make $8.3 million this season, according to multiple reports.

—Red Sox second baseman Dustin Pedroia will not report on time to spring training due to continued soreness in his left knee.

Position players are scheduled to arrive Monday in Fort Myers, Fla., but interim manager Ron Roenicke confirmed that the 36-year-old Pedroia will not be there.

The four-time All-Star, four-time Gold Glove winner, two-time World Series champion and 2008 American League MVP has only played in nine games over the past two seasons. Pedroia has undergone multiple surgeries to restore the cartilage and remove scar tissue since originally injuring his knee in 2017. He had joint preservation surgery last August.