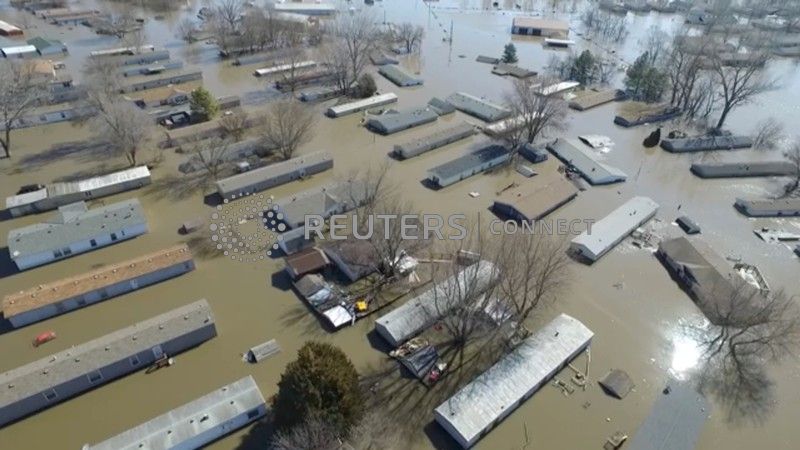 With emergency sirens blaring as the Missouri River rose to the top of the three-story-high levee wall in St. Joseph, about 55 miles (88 km) north of Kansas City, Missouri, sheriff’s deputies rushed door-to-door urging residents to flee to higher ground.

About 1,500 residents and 6,000 employees of neighboring businesses were ushered out of the southern end of town, a city official said. Most of the evacuated dwellings were trailer homes interspersed among factories, warehouses and stockyards along a stretch of the riverfront known as “the Bottoms.”

Many residents appeared stunned as they scurried out of their homes with armloads of hurriedly gathered belongings to throw into their vehicles before joining a steady stream of cars, pickup trucks, SUVs and tractor-trailers.

The abrupt evacuation, coming as the river rose just over 15 feet (4.57 meters) above flood stage – slightly exceeding the previous record of 32.1 feet (9.78 meters) – appeared to take authorities and residents by surprise.

“We don’t have anywhere to go. This is overwhelming,” said Linda Roberts, 70, as she and her husband, John, 66, packed their SUV, their dog sitting uneasily in a pet carrier.

With police doing their best to direct gridlocked traffic and with helicopters whirring overhead, dust billowed up from packed roadways for hours, mixed with the odors of livestock and chemicals, as the mass exodus proceeded in slow motion.

The St. Jo Frontier Casino, about 5 miles to the north, was already surrounded by water, and roadways along the river were submerged, officials said.

The flood crest was expected to reach the Kansas towns of Atchison and Leavenworth, about 35 miles farther downstream, on Saturday, and Kansas City as early as Sunday, officials said.

Missouri River flooding was triggered by last week’s “bomb cyclone” storm, which killed at least four people, drowned livestock and closed dozens of roads across a large swath of Nebraska and Iowa. Property and financial losses for the two Midwestern states were projected to surpass $3 billion.

Torrential showers over hundreds of square miles of melting snowpack produced record volumes of runoff that poured into the Missouri just above the Gavins Point Dam where the river divides Nebraska from South Dakota, nearly 400 miles upstream from Kansas City. The dam is operated by the U.S. Army Corps of Engineers.

Water entering the reservoir from that storm marked the greatest volume measured there in 120 years of recordkeeping, said John Remus, chief water manager for the Army Corps’ Missouri River basin.

The downstream flow, breaking flood stage records at several locations along the river, has placed enormous strain on the region’s system of flood-control levees. Nearly 50 levee breaches have been confirmed in the Army Corp’s Omaha district alone, encompassing the hardest hit parts of Nebraska, Iowa and Missouri, officials told a news briefing.

Nebraska farmers were digging out of flooded fields and coping with cut-off highways on Friday.

“The biggest thing right now is the transportation. We’re right between Loup and Cedar River, and transportation is nearly impossible,” said Ryan Sonderup, 36, of Fullerton, Nebraska, who has been farming for 18 years.

Officials downstream were carefully watching flood gauges in Atchison, Kansas, a community of about 10,000 residents where a handful of riverfront properties and roads were under threat of flooding.

Missouri Governor Mike Parson declared an emergency on Wednesday as high water forced evacuations of several small farm communities in the northwestern corner of his state.

The threat of extensive flooding lingers over the wider Midwest and could grow dire in coming weeks with additional rainfall and melting snow runoff, putting more than 200 million people at risk, the National Oceanic and Atmospheric Administration (NOAA) said on Thursday.