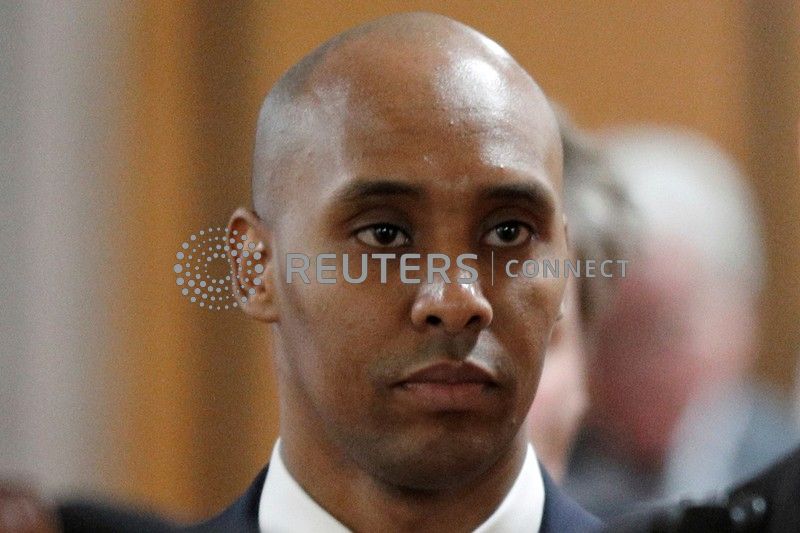 FILE PHOTO: Former Minneapolis police officer Mohamed Noor walks out of the courthouse during a recess on the first day of opening arguments of his trial, where he is charged in the 2017 fatal shooting of 40-year-old Australian woman Justine Ruszczyk Damond, in Minneapolis, Minnesota, U.S., April 9, 2019. REUTERS/Adam Bettcher/File Photo

MINNEAPOLIS (Reuters) – A former Minneapolis police officer was sentenced to 12-1/2 years in prison on Friday for the fatal shooting of an Australian woman nearly two years ago after she had called police to report a possible sexual assault.

Mohamed Noor, 33, was found guilty on April 30 of third-degree murder and second-degree manslaughter for killing 40-year-old Justine Ruszczyk Damond outside her home in a case that drew international attention.

Before the sentencing, Noor made a tearful apology to Damond’s family and described how the fear that led him to pull the trigger turned to horror upon seeing what he had done.

“I apologise for taking the life of a perfect person who was so dear to them,” he said. “I caused this tragedy and it is my burden.”

Noor’s lawyers had asked the court for a sentence of probation, or at most, a prison term of a year and a day, citing his community service and his cooperation with the investigation.

But Minnesota District Judge Kathryn Quaintance rejected the plea for leniency, saying that while Noor had shown remorse for the consequences of his decision, he had not taken responsibility for his error in judgment during the shooting.

“The law does not allow license because someone is a good person,” Quaintance said in passing the a sentence before a hushed courtroom. “Good people sometimes do bad things.”

Noor, who has been in custody since his conviction, was led out of the courtroom with a grave expression on his face.

The case was one of a series of highly publicized police killings in recent years. In many of them, the victims were black men or teenagers, but in this case, Damond was white and Noor is a black Somali immigrant.

Several of Noor’s friends and family members, most of them Somali, gathered in the courthouse lobby afterward to protest the sentence.

The court also heard from six of Damon’s friends and relatives, who read statements detailing the mental anguish and fear of the police they felt since her death.

“I now have more anxiety when I see humans giving the oath to protect and serve,” said Zach Damond, her stepson.

Noor, the first Minnesota police officer to be convicted of murder, and his partner drove to Damond’s home the night of July 15, 2017, to respond to a report she had made of a possible sexual assault. When Damond approached the patrol car, Noor fired through the car window, killing her.

Noor testified that he shot her in self-defence after he and his partner were startled by a loud noise.