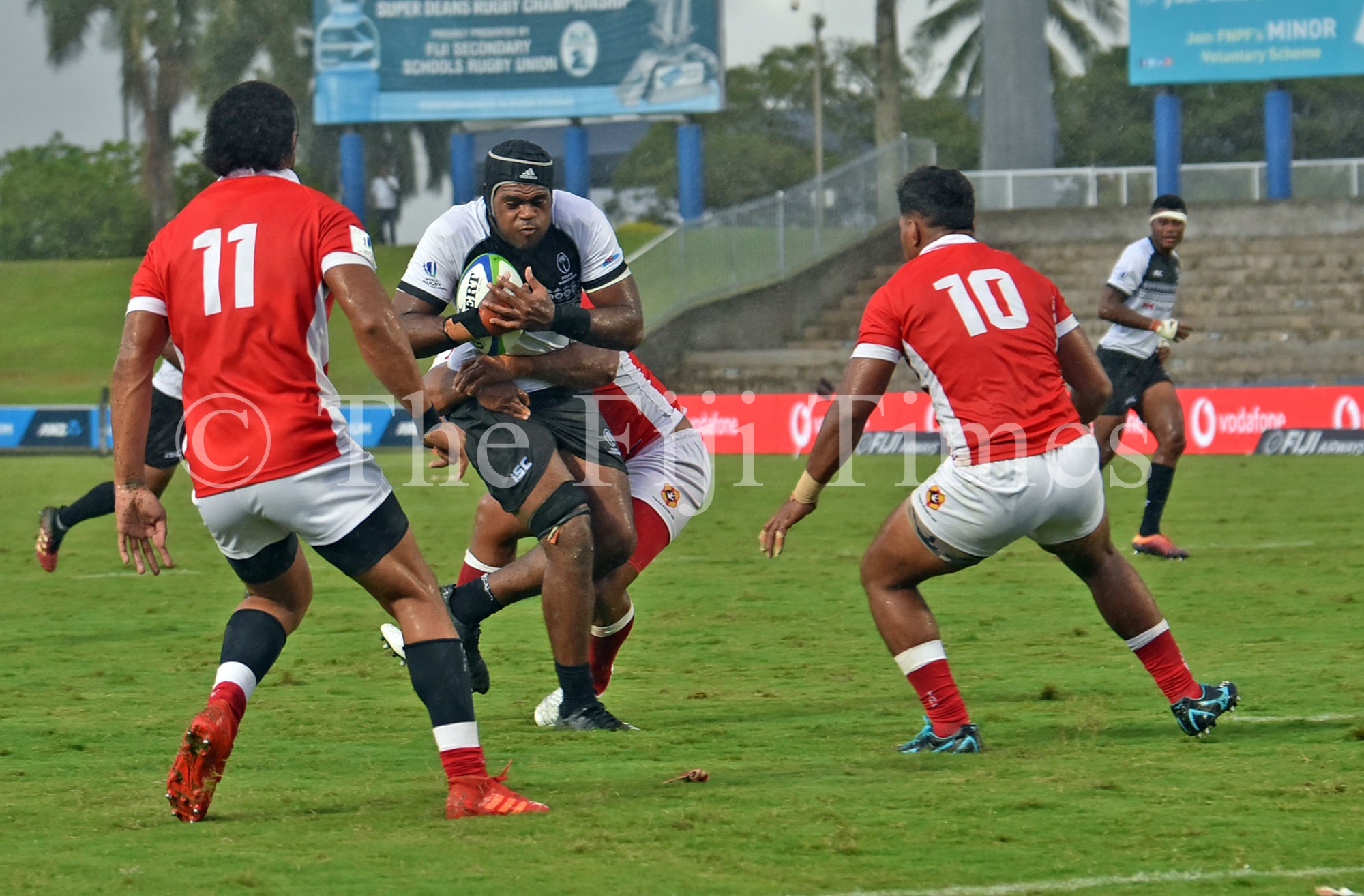 Chris Minimbi of the Swire Shipping Fijian Warriors on attack against Tonga A during their World Rugby Pacific Challenge match at the ANZ Stadium in Suva on Tuesday, March 10, 2020. Picture: JONACANI LALAKOBAU/FILE

A rugby rising star has found inspiration in the success of some Fijian rugby greats amid the global threat of the COVID-19 pandemic.

Despite the cancellation of Fijian sports, Fiji Warriors squad member, former Fiji under-20 rep, Pacific Combine squad member and former Marist Brothers High School head boy and dux, Chris Minimbi is clinging to the hope that the crisis would be over soon.

He is from Papua New Guinea, but has been living in Fiji because of his maternal links to Kadavu. Like every other Pacific Islander rugby youngster, Minimbi wants to be a great rugby player one day.

He is now on that track, and was part of the Pacific Combine squad that was assembled by World Rugby after the Pacific Rugby Challenge a fortnight ago. The squad was disbanded last week because of the pandemic.

“I am taking every opportunity I can find and I want to play overseas and be like other Flying Fijians who have contracts overseas,” Minimbi said.

As Juan Antonio “Chi-Chi” Rodríguez, a Puerto Rican professional golfer who won the PGA Tour eight times, once said ‘Heroes are created in the moment of crisis,’ Minimbi, who has called Fiji home in the past few years after his father died, wants to succeed in rugby to help his family.

“I want to see how far this career takes me. It is fun and it keeps me fit. It starts small in trying to do every little things right. Through God’s grace everything will fall into place.”

Minimbi and other Pacific Combine squad members had been prepared by some rugby legends to get overseas contracts.

“I am thankful to World Rugby and the Pacific rugby unions for developing this. It is a huge experience.

The coaches and physios are world-class and I have been learning so much daily basis.” The PNG-born learns from Wallabies’ Will Genia, and Fijians Ifereimi Rawaqa, Kele Leawere, Leone Nakarawa and looseforwards who had represented Fiji.

“Will Genia is one of my heroes, but going to that level in his position he started small and worked hard through God’s grace. It’s a huge honour to play in a position where the brothers such as coach Kele and Ifereimi Rawaqa who had done before me. I idolise the Flying Fijians in the Rugby World Cup in 2007. They went against the odds and did the impossible. I look up to them for inspiration. Hopefully one day I will be like them.

“I am from Papua New Guinea but my mother is from Kadavu and we are living in Fiji. I grew up in PNG until I was year 10. My rugby started in Marist Brothers’ High School where I did Year 10. I did not play rugby in PNG. I came here and I picked up the ball and got into Marist.

“My father passed away when I was eight and it has been very, very tough. My mother is very strong. She does not like me playing rugby but she told me that if I want to play, I should give it 100 per cent. I should not be scared for no reason. She is my biggest inspiration. My grandparents are very old. They should be resting but they are looking after me. They are my main drivers. I just keep strong for that, they are my strengths and they keep me going.”

He said Pacific youngsters should have hope.

“Rugby is a great sport. It builds a lot of character. One major part of building character is education. After 12 years your body is going to tell you to stop. By that time it is best to go back to something you love. Find enjoy you enjoying studying. Don’t study it because your mother wants you to study it. Study the field where your passion is and give it your 100 per cent.”