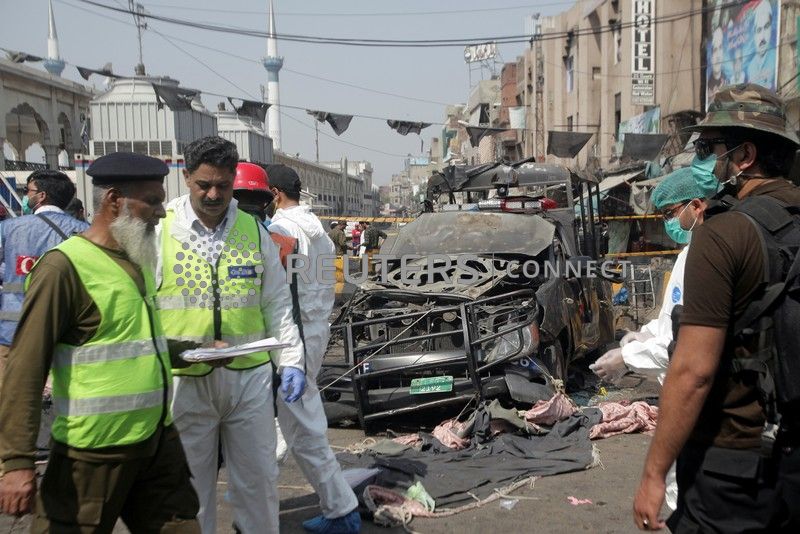 Security officials and members of a bomb disposal team survey the site after a blast in Lahore, Pakistan May 8, 2019. REUERS/Mohsin Raza

LAHORE, Pakistan (Reuters) – A bomb targeting Pakistani police outside a major Sufi shrine in the city of Lahore on Wednesday killed at least 10 people and wounded more than 20, officials said.

The blast, a day after the beginning of the Muslim holy month of Ramadan, went off at a police checkpoint near the Data Darbar, one of the largest Muslim shrines in South Asia, which attracts tens of thousands of visitors a year.

“Police was the prime target in this attack. We are collecting forensic evidences to ascertain the nature of the blast,” said Ashfaq Khan, deputy inspector general of police operations in Lahore.

A police spokesman said the death toll rose to 10, six of them civilians and four police, after a police officer died of his wounds. Officials earlier said eight police had died. At least 23 people were wounded.

Muhammad Farooq, a spokesman for the city’s rescue services, said at least seven of the wounded were in critical condition.

Police set up checkpoints on main roads leading to the shrine and hospitals were placed on alert, officials said.

The attack was claimed by the Hizbul Ahrar, a splinter group of the Pakistani Taliban, a movement that has been fighting the government for years. In a statement, the group said the attack targeted police and had been timed to avoid civilian casualties.

“This attack was carried out at a time when there were no civilians near the police,” said Abdul Aziz Yousafzai, a spokesman for the militant group.

Prime Minister Imran Khan issued a statement condemning the attack and asking the provincial government to help the victims.

Sufis, who follow a mystical form of Islam that has been practised in South Asia for centuries, have been regularly attacked by hardline Sunni Muslim militants in the past.

In 2010, two suicide bombers struck the Data Darbar shrine killing 42 people and wounding 175, in an attack officials said was carried out by the Pakistani Taliban.

Militant violence has since declined sharply in Pakistan after a sustained crackdown following the country’s deadliest attack in 2014, which killed more than 150 people, many children, at a school in the western city of Peshawar.

Since an attack in a Lahore park targeting Christians celebrating Easter in 2016 killed more than 70 people, Pakistan’s second largest city has been largely quiet although an attack last year killed nine people.

However, officials warned that Wednesday’s blast showed the need for vigilance during Ramadan.

“People should remain aware of their surroundings when going to pray,” said a Punjab provincial minister, Mian Aslam.

Police said a general security alert was in force but there had been no specific warning about a threat to the Data Darbar, which protected by heavy layers of security.

The complex contains the shrine of Syed Ali bin-Osman Al-Hajvery, widely known as Data Ganj Bakhsh, an 11th century Sufi preacher originally from Ghazni in what is now Afghanistan.