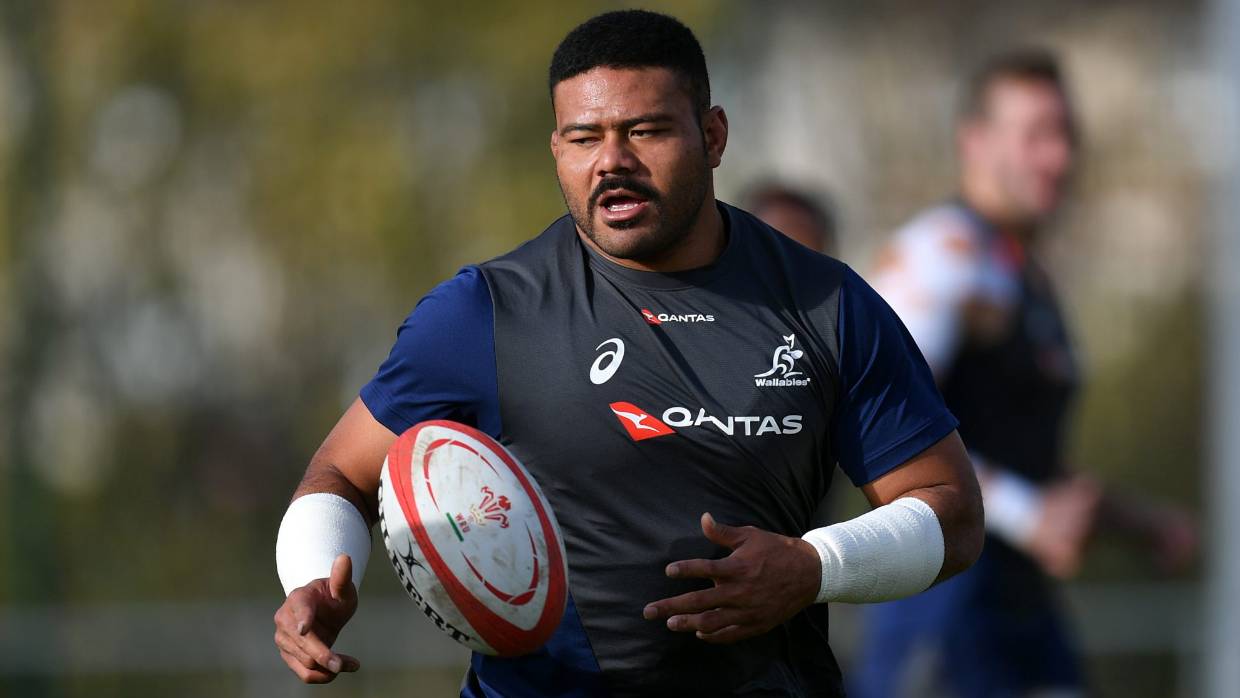 Tolu Latu trains with the Wallabies in Wales this week. Picture: GETTY IMAGES

The Wallabies are looking to record a 14th successive win against the Welsh on Sunday morning (NZT), with Latu one of four changes made by Cheika from the side that lost to New Zealand two weeks ago in Japan.

Latu has been sin-binned twice this season, including a 10-minute spell on the sidelines for slapping All Blacks hooker Codie Taylor in Yokohama.

Cheika has jettisoned Folau Fainga’a with veteran hooker Tatafu Polota-Nau named on the bench and is confident Latu can hold his nerve in the red-hot environment of the Principality Stadium.

“I think Folau Fainga’a has had a great year,” he said.

“He wasn’t playing Super Rugby at the start of the year and he’s been … starting for the Wallabies for four or five games in a row.

“It’s gives an opportunity to Tolu who’s had his ups and downs over the last few weeks but I’m a big believer in Tolu and giving him a chance at starting.”

Jack Dempsey is also named in the starting line-up for the first time in 13 months with the hard-hitting back-rower preferred to Ned Hanigan who drops to the bench.

Dempsey came on during the second half in Yokohama for his first appearance since suffering nerve damage after ripping his hamstring off the bone in October 2017.

Cheika said he has been was impressed with Dempsey’s contribution and his displays in training made his mind up to start the NSW Waratahs flanker.

“Dempsey was quite abrasive when he came on in the last game,” Cheika said.

“He didn’t play a lot of time but it’s a good opportunity for him now, with three big games left in the year to have a starting role and re-acquaint himself with Test footy.

“I didn’t quite think he’d be playing in the last game but he showed, when he came to training, he was up for it.

“You can see that in him, it’s one of the things you like about him because he’s got a thirst for it, he wants to play footy. He wants to try and be the best he can be.”

Lock Adam Coleman also returns following the groin injury he suffered before the New Zealand match and centre Samu Kerevi starts at centre after an impressive cameo against the All Blacks.

“Adam’s done really well for us since he’s come into the team,” Cheika said.

“He started working his way into the team, he’s become a mainstay inside of the team and now I think that’s setting around for other players in that position to lift their game.”