Mexico to go after all narco judges: official 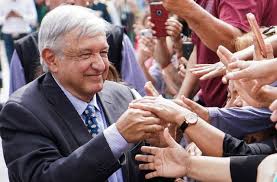 MEXICO CITY (Reuters) – Mexico’s President Andres Manuel Lopez Obrador, looking to make good on a promise to clean up rampant corruption, will go after judges that have aligned themselves with the country’s notorious drug cartels, a government official said.

The United States slapped sanctions on a Mexican judge and a former state governor on Friday, accusing them of taking bribes from drug traffickers, and saying that government corruption had allowed Mexican drug gangs to operate with impunity.

Santiago Nieto, head of the finance ministry’s financial intelligence unit, said authorities were investigating other cases of judges that may have taken bribes from organized crime, underscoring that the government would make sure that no one is above the law.

“I have received instructions from the president of the republic to go after anybody regardless of their position or party loyalty,” Nieto said in an interview with Reuters.

The magistrate sanctioned on Friday, Isidro Avelar Gutierrez, accepted bribes from the Jalisco New Generation Cartel (CJNG) and the Los Cuinis Drug Trafficking Organization in exchange for favorable rulings for their senior members, according to the U.S. Treasury Department and Drug Enforcement Agency.

Asked if the case of Avelar Gutierrez was the tip of the iceberg, Nieto said it was, but added he could not discuss the details of any open investigations.

“What I can say is that we are working in coordination with various institutions of the Mexican state in cases related to corruption in the judicial system,” said Nieto. “The Mexican financial system must not be used by criminal groups to launder money.”

In December, shortly after taking office, Lopez Obrador took aim at the finances of the powerful CJNG in what Nieto described as an opening salvo in the fight to stop criminal gangs from flourishing with impunity.

Mexico’s drug war has raged for over a decade since the government sent in the armed forces at the end of 2006 to crack down on cartels. Since then, more than 200,000 people have been killed in the violence and thousands more disappeared.

Speaking of the decision to go after Avelar Gutierrez, Nieto said: “This is a clear message. The courts are one of the central values, fundamental pillars of the democratic state. That is why if a judge or magistrate betrays that position they must be sanctioned.”