Mexico to auction Lamborghini, other seized assets to help poor 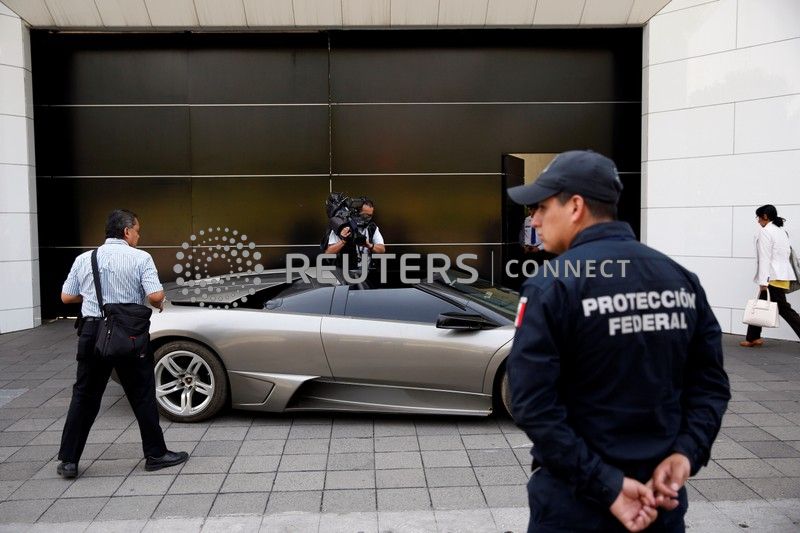 A police officer stands near a Lamborghini Murcielago 2007, part of the fleet of vehicles seized by the government from politicians and organized crime as part of an auction in Mexico City, Mexico May 21, 2019. REUTERS/Carlos Jasso

MEXICO CITY (Reuters) – Mexico’s government will auction a Lamborghini, homes and other assets seized from gangsters and at least one former politician, officials said on Tuesday, part of a “Robin Hood” programme to use millions of dollars in ill-gotten gains to aid the poor.

The first auction, set for Sunday, will seek bids for 77 vehicles with a total starting price of around $1.5 million, Ricardo Rodriguez, head of the newly created Institute to Return Stolen Goods to the People, said at a news conference.

“Before, this worked like a reverse Robin Hood … taking from the people and giving to the corrupt. Not anymore,” Rodriguez said.

The proceeds will go to two municipalities in the southern state of Oaxaca, which President Andres Manuel Lopez Obrador said are among the poorest in the country. The vehicles up for auction include Porsches, Corvettes, Mercedes-Benzes, a Mustang convertible and a 2007 Lamborghini Murcielago.

A 2017 report by the Organisation for Economic Cooperation and Development noted that recent studies estimated Mexico lost between 5% and 9% of its gross domestic product (GDP) to corruption annually.

Since taking office in December, Lopez Obrador, a leftist, has rolled out a string of welfare programs for the poor and the elderly, cut salaries for top civil servants and said he is saving public money by eliminating corruption. He announced plans for a “Robin Hood” institute in April.

The Mexican president, who has shunned the often luxurious trappings of the country’s wealthy elites and was known to drive through the capital in a modest white Volkswagen Jetta, added that two cars and an ambulance donated by the King of Jordan will go to the National Guard, a new security force.

One of the auctions will seek to sell three homes worth at least $7 million, including one with an indoor pool in an upscale Mexico City neighbourhood. The money will go towards a youth drug rehabilitation programme.

Proceeds from another auction of jewellery seized from organised crime groups will go to communities in the mountains of Guerrero state, where many families struggle to eke out a living by growing opium poppies.

Not all the assets come from drug lords. Rodriguez said one of the homes up for auction belonged to a former politician.