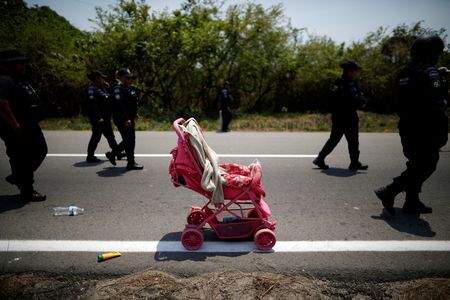 FILE PHOTO: A stroller abandoned by Central American migrants is seen after an immigration raid in their journey towards the United States, in Pijijiapan, Mexico April 22, 2019. REUTERS/Jose Cabezas/File Photo

MEXICO CITY (Reuters) – Mexico has returned 15,000 migrants in the past 30 days, a senior government official said on Tuesday, pointing to an uptick in deportations in the face of pressure from U.S. President Donald Trump to stem the flow of people north.

Speaking at a news conference, Tonatiuh Guillen, head of the National Migration Institute, did not say where those people were returned to, but the majority of migrants moving through Mexico are from Guatemala, Honduras and El Salvador.

Guillen said that 11,800 people had been returned in the first 22 days of April. That compares with 9,650 for all of April last year.

A third of all migrants currently arriving in Mexico are minors and there are also now more than 1,000 Cuban migrants in the southern Mexican state of Chiapas and another 2,000 in the northern border city of Ciudad Juarez, Guillen told reporters.

Cubans are increasingly traveling to Mexico to reach the U.S. border to request asylum, many of them citing political repression and bleak economic prospects on the Communist-ruled island as their motivation.

Speaking alongside Guillen, Interior Minister Olga Sanchez said Mexico was not to blame for an “unprecedented” increase in the number of Central American migrants entering the country.

In fact, most Central American migrants say they are running away from the rampant gang violence and lack of opportunities stemming from entrenched poverty and corruption back home.

Sanchez noted Mexico had an obligation to control its southern border with Guatemala and that people entering the country must respect Mexican laws and register with authorities, after a recent clash between border agents and migrants.

Following a surge in apprehensions of Central Americans trying to enter the United States, Trump last month threatened to close the U.S.-Mexico border if the Mexican government did not stop illegal immigration right away.

More than 100,000 people were apprehended or presented themselves to U.S. authorities in March, according to the White House, calling it the highest number in a decade.

The administration of Mexican President Andres Manuel Lopez Obrador has stepped up migrant detentions and tightened access to humanitarian visas, slowing the flow of caravans north and leaving hundreds of people stuck in the south.