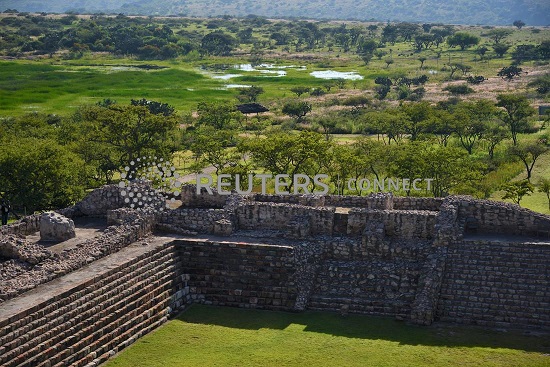 A view of the pre-Hispanic site of Canada de la Virgen, Guanajuato, Mexico, in this undated handout photo. Mauricio Marat/INAH/Handout via REUTERS

The pre-Hispanic site features a large stone temple complex and other structures, many aligned with astronomical bodies, and is believed to have reached its peak around 600-900 AD, contemporaneous with dozens of major Maya cites.

Ancient Otomi settlements were mostly clustered around the present-day central Mexican states of Puebla, Hidalgo and Guanajuato, where Cañada de la Virgen is located, before being conquered by the Aztecs in the 14th century and incorporated into their sprawling empire.

Scholars believe an ancient version of the Otomi language, which is still spoken today, may have been the language spoken at Teotihuacan, the ancient metropolis near Mexico City and home to towering pyramids and temples.

In a statement, INAH stressed that the site’s designation as a protected archeological monument is a first under the government of President Andres Manuel Lopez Obrador, which has slashed archeology research budgets over the past few years as part of an austerity push.

The declaration, granted under a presidential decree, affords protection against commercial development and other building projects.

INAH added that past archaeological digs at Cañada de la Virgen have revealed artifacts from both the Pacific and Atlantic coasts, suggesting it was located along a major trading route.

Lopez Obrador has faced backlash from indigenous Maya communities in the archaeologically rich Yucatan peninsula for a multi-billion dollar tourist train project under construction that critics fear will damage delicate ecosystems and undiscovered ruins. The president argues the project will promote development in Mexico’s poorer south while minimizing harm to the environment.