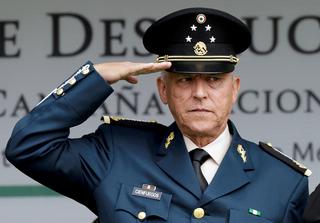 In return, Mexico privately told Barr it would work with the United States to arrest a high-level cartel leader involved with trafficking large quantities of the synthetic opioid fentanyl, the source said.

Reuters was unable to establish which cartel leader Mexico and U.S. officials would be targeting and the source declined to give any names citing a fear of endangering the investigation.

It has not been previously reported that Barr extracted a promise to hone in on a senior cartel leader in return for releasing Cienfuegos.

“Mexico committed to collaborate with the United States in the capture of a primary objective,” said the source, who asked not to be identified in order to speak freely.

Daniel Millan, spokesman for Mexican Foreign Minister Marcelo Ebrard, said “what we agreed was to maintain a united front against crime and cooperation that respects the sovereignty of each country.”

He said he did not have information regarding an agreement about a high-level capture.

A spokeswoman for the U.S. Department of Justice said there was no deal and referred Reuters to earlier statements that said the case was dismissed in a sign of confidence in Mexican justice and because of diplomatic considerations.

The United States flew Cienfuegos back to Mexico on Wednesday, after a U.S. federal judge dropped charges against him at Barr’s request. Under the agreement, he will now be investigated in Mexico.

The decision to release the most senior Mexican defense official ever charged in the United States with cartel collusion met with anger from former agents of the Drug Enforcement Administration (DEA) who said the United States had a strong case against Cienfuegos.

Cienfuegos’ arrest at Los Angeles International Airport in October was the result of a multi-year investigation that used wire taps to track a military figure, dubbed “El Padrino” by traffickers.

Investigators concluded “El Padrino” or The Godfather, was Cienfuegos and that he helped the cartel move tonnes of narcotics.