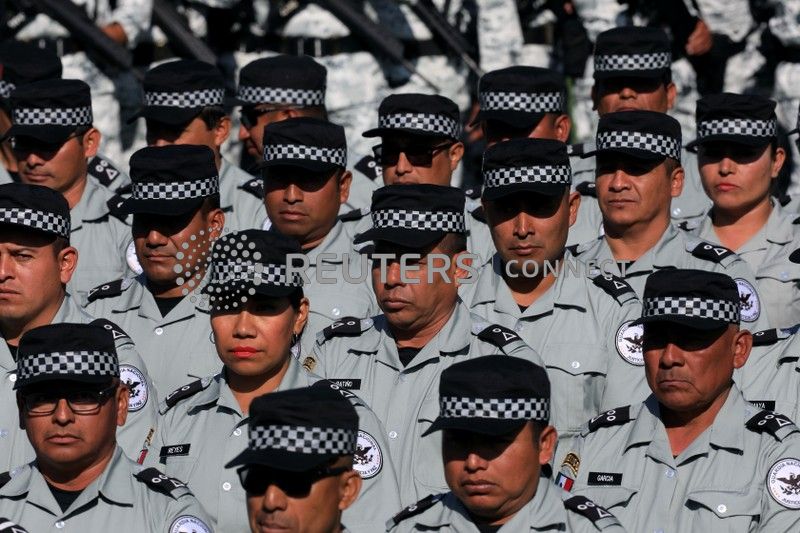 Members of the National Guard stand in formation as the government kicks off its new militarized National Guard police force in an effort to tackle a deteriorating security situation, at Campo Marte in Mexico City, Mexico June 30, 2019. REUTERS/Carlos Jasso

MEXICO CITY (Reuters) – Mexican President Andres Manuel Lopez Obrador said on Monday he would like to disband the army and put national security in the hands of the new National Guard militarised police force, though he recognised the proposal was unlikely to happen.

In an interview with Mexican newspaper La Jornada, the leftist president said he favoured guaranteeing the nation’s security through the National Guard, which he formally inaugurated on Sunday.

“If were up to me, I would get rid of the army and turn it into the National Guard, declare that Mexico is a pacifist country that does not need a military and that the defence of the nation, if necessary, would be done by all,” he said.

Only a few countries in the world have abolished standing armies, among them the Latin American nations of Costa Rica and Panama. Mexico’s army has traditionally kept on the sidelines of international conflict, but has been deployed to tackle drug gangs since 2007.

Lopez Obrador recognised the political challenges to eliminating the military, adding: “I can’t do it because there is resistance. One thing is what is desirable and another thing is what is possible.”

The creation of the National Guard, which launched with 70,000 members and which Lopez Obrador intends to grow to 150,000 units across Mexico, has raised concerns about the militarization of law enforcement in Mexico.

Lopez Obrador has already tapped the force, which was created by a constitutional change, to patrol the country’s northern and southern borders in response to U.S. President Donald Trump’s demands that Mexico do more to contain migrant flows.

The National Guard has been assembled quickly, drawing on members of the armed forces and federal police, who have often been implicated in abuses during ongoing efforts to subdue gang violence.

Lopez Obrador said he recognised the importance of curbing such abuses as the force ramps up.

The challenge the Mexican government faces, Lopez Obrador said, is “for human rights to be respected and for there to be a different conduct in the National Guard, made up of soldiers and sailors.”