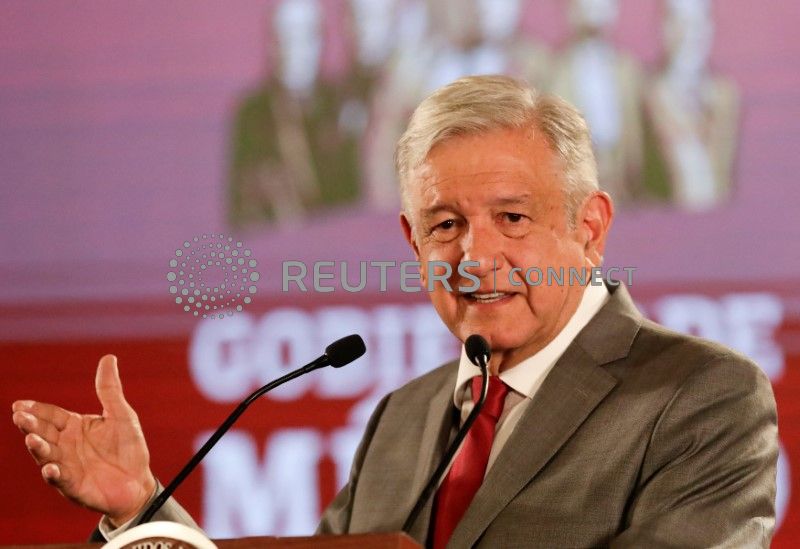 MEXICO CITY (Reuters) – Mexico’s president said on Friday he would respond with “great prudence” to threats by his U.S. counterpart Donald Trump to impose tariffs on Mexican goods entering the United States, and called on Mexicans to unite to face the challenge.

Trump says he will introduce punitive tariffs on June 10 if Mexico does not halt the flow of illegal immigration from Central America to the United States, battering Mexican financial assets and hurting stocks worldwide.

It is the biggest foreign policy test to date for President Andres Manuel Lopez Obrador, who during his six months in power has consistently sought to deflect Trump’s barbs and avoid embroiling himself in confrontations.

Lopez Obrador predicted the Trump administration would rectify the tariff threat and said that Foreign Minister Marcelo Ebrard would be in Washington working to convince the U.S. government that Trump’s measures were in neither country’s interest, and that Mexico was making progress containing migration.

Trump said on Thursday he would ratchet up tariffs unless Mexico stopped people from illegally crossing the border it shares with the United States. The plan would impose a 5% tariff on Mexican imports starting on June 10 and increase monthly, up to 25% on Oct. 1.

Speaking at his regular morning news conference, Lopez Obrador said he believed Trump would understand that the tariff threat was not the way to resolve the matter, and stressed that Mexicans had united behind his government.

“I tell all Mexicans to have faith, we will overcome this attitude of the U.S. government, they will make rectifications because the Mexican people doesn’t deserve to be treated in the way being attempted,” Lopez Obrador said.

Mexico’s main stock index fell more than 2% after opening, and the peso currency was down 3% against the dollar.

Since taking office in December, Lopez Obrador has urged Trump to help him tackle migration by promoting economic development in Guatemala, Honduras and El Salvador, where most of the migrants apprehended on the U.S. border come from.

A veteran leftist who won a landslide election victory in July 2018, Lopez Obrador has shied away from foreign policy entanglements, preferring to leave diplomacy to Ebrard.

Though Lopez Obrador again stressed the need for diplomacy on Friday, he has in the past offered pointed criticism of Trump over migration policy. He was adamant that he had the support of Mexicans living both in Mexico and the United States.

In a letter responding to Trump’s announcement on Thursday, Lopez Obrador called Trump’s policy of America First “a fallacy” and accused him of turning the United States into a “ghetto” that stigmatized and mistreated migrants.

Mexico has yet to receive a reply to the letter, according to Lopez Obrador, who said he would hold news conferences at the weekend about his government’s progress.