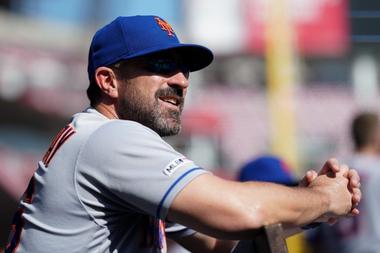 THE New York Mets fired Mickey Callaway after two seasons as their manager, the team announced on Thursday.

Callaway guided the Mets to an 86-76 record and third-place finish in the National League East. The 44-year-old owned a 163-161 mark in two seasons since replacing Terry Collins as manager.

“We want to thank Mickey for his consistent work ethic and dedication over the last two seasons and I’m certain these characteristics will serve him well in his next opportunity,” Mets general manager Brodie Van Wagenen said in a statement. “A decision like this is never easy, however, we believe it is in the best interest of the franchise at this time.”

Callaway was called into question throughout the season for various decisions surrounding the team’s pitching staff. He appeared to defend himself on the penultimate day of the regular season.

“I put my heart and soul into this team, into this game, every single day, and I believe in those players,” Callaway said Saturday. “I make unpopular decisions every day, whether it’s unpopular to you guys or the players. And every decision I make is going to be unpopular to somebody. But I make decisions based on trying to win games and trying to keep these guys motivated to win as many games as they possibly can. And I think that in the end when you look back on it, our players played hard and continue to play hard for a reason. And I’m proud of that.”

The New York Post reported earlier Thursday that Van Wagenen and Callaway were scheduled to meet to discuss the manager’s status with the team.