Mets’ Cespedes declares he is ready to play 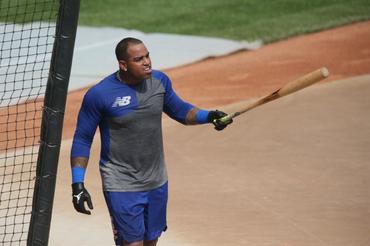 Yoenis Cespedes is insisting he will be ready to play when the 2020 season starts for the New York Mets on July 24.

If so, his first appearance will come more than two years after he last appeared in a major league game.

“I don’t have an exact percentage on how I feel, but I feel way better than I did back in March,” Cespedes said through a translator during a video conference call on Saturday.

Cespedes has been hounded by hip and leg injuries over the past few years.

He underwent surgeries on both heels and, while still recuperating, broke his right ankle in May of 2019 during a violent fall at his ranch in Port St. Lucie, Fla. It was later revealed that the ranch incident involved a wild boar.

Cespedes missed the entire season and was hopeful this spring that he was close to a return. The delay to the start of the season due to the coronavirus pandemic gave him additional time to recover.

When the Mets open the campaign against the Atlanta Braves, it is possible that Cespedes can serve as the designated hitter with that element in play for National League teams.

He isn’t sure if he can play the outfield full-time but feels his improved fitness will lead to him seeing some action in the field.

“The way that my body’s feeling right now and the way that I’ve been able to run, I feel so much better and I feel like I’ll be able to play the outfield if that comes up,” Cespedes said.

The two-time All-Star has played in just 119 games over the past three seasons.

Cespedes played in 37 contests before a hip flexor sidelined him for two months.

He returned to play in a one game on July 20 before being shut down with the heel injuries. He underwent surgery on the right heel in August and the left one in October.

Cespedes has topped 20 homers five times during his career but says he isn’t worrying around the numbers this season.