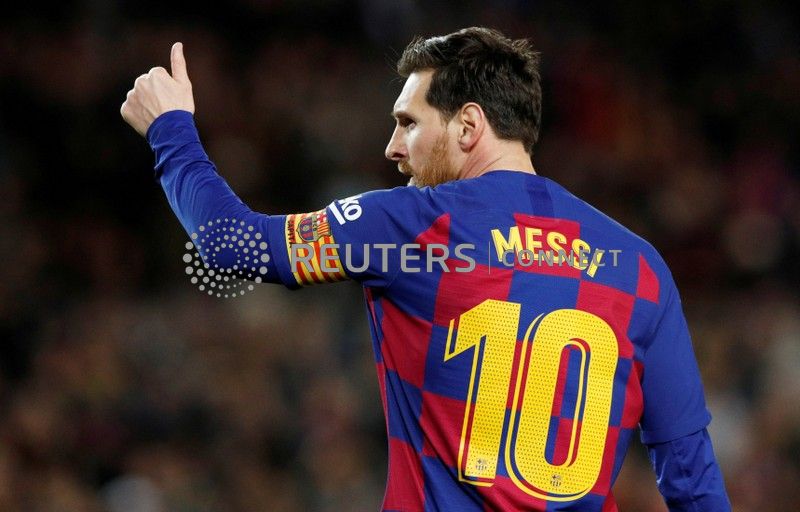 BARCELONA (Reuters) – Barcelona players will make an extra contribution on top of the 70% pay cut they have agreed to take during the enforced La Liga break so that the club’s other employees can earn their full salaries during the coronavirus crisis, captain Lionel Messi said.

The club’s all-time top scorer was among many Barcelona players who released identical statements on social media on Monday to confirm the decision.

“As well as the 70% reduction in our salaries during the national state of emergency, we will make a contribution so that the club’s employees can earn 100% of their salaries during this time,” Messi said on his Instagram account.

Reacting to criticism that the players had not made any announcements about what they were doing to help others during the pandemic, Messi added: “We haven’t spoken until now because our priority was to find real solutions in order to help the club and those who will be most affected by this situation.

“We also could not forget to send all our best wishes to all Barcelona fans who are suffering in these tough times and everyone who is waiting patiently in their home waiting for the end of this crisis.”

The number of coronavirus cases in Spain increased to 85,195 on Monday from 78,797 on Sunday, the country’s health ministry said, as the infections surpassed those reported in China. [L8N2BN3JS]

So far 7,340 people have died from the virus in Spain.

The country is into the third week of a lockdown while all organised football has been postponed indefinitely.

In a separate statement, Barca announced that all players in its sports teams had agreed to reduce their salaries during the state of emergency and confirmed the first team players were taking an additional pay cut for the benefit the employees.

“The club wishes to show its gratitude to its professional athletes during such an exceptional situation,” it added.