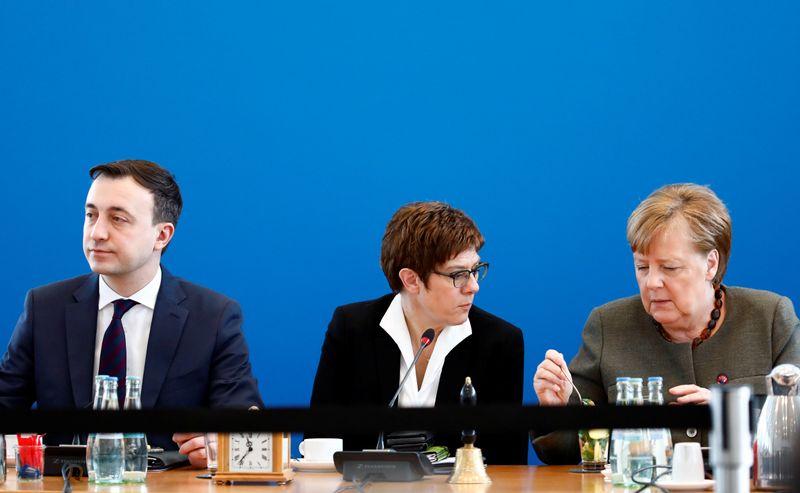 BERLIN (Reuters) – Germany’s Christian Democrats (CDU) said on Monday they would hold a congress on April 25 to pick a new leader who they want to succeed Chancellor Angela Merkel, scrambling to resolve a crisis shaking the party’s hold on power.

The decision on the succession timetable came after voters saddled the CDU with its worst result in a state vote in Hamburg on Sunday, punishing it for flirting with the far right in an eastern state and hastening a messy leadership battle.

The CDU succession debate was blown wide open earlier this month when party leader Annegret Kramp-Karrenbauer unexpectedly said she would no longer seek to succeed her mentor Merkel.

“A new party chairman or chairwoman will be elected at this party congress,” Kramp-Karrenbauer said of the April 25 meeting. “This is a clear signal for the CDU candidate for chancellor.”

Merkel, chancellor for almost 15 years, has said she will not run again in the next federal election, due by October 2021.

Kramp-Karrenbauer, tasked by the party with organising the succession, said she had agreed the timetable and procedure with the four leadership contenders to have come forward so far.

German media reported that Merz would formally run as a candidate. He is due to hold a news conference on Tuesday.

Many analysts believe a cohabitation arrangement of party chair and chancellor would be more difficult if Merz, an erstwhile rival of Merkel, captures the CDU leadership.

The centre-left Social Democrats – junior partners in Merkel’s ruling coalition – have signalled they could quit the government if she is forced out as chancellor.

Kramp-Karrenbauer stressed the party’s top brass expected the winner of the leadership contest to work alongside Merkel.

“Everyone assumes that there will be good cooperation with both the Bundestag parliamentary group and the CDU-led federal government – and this is certainly a question and a requirement that all candidates will have to meet,” she told reporters.

Kramp-Karrenbauer’s decision to give up her ambition of succeeding Merkel came after an eastern branch of the CDU defied the national party and voted with the far-right Alternative for Germany (AfD) to install a state premier from a third party.

That broke a post-World War Two consensus among established parties in Germany that the far right should be shunned.

In Hamburg, the CDU slipped into third place, scoring just 11.2% in the northern port city – behind the SPD, for whom the city is a stronghold, and the Greens.

Mass-selling daily Bild dubbed the Hamburg result a “debacle” for the CDU, whose faltering leadership has raised questions over the future course of Europe’s largest economy.