Merkel sticks to Spitzenkandidat though Macron pushes for EU talks 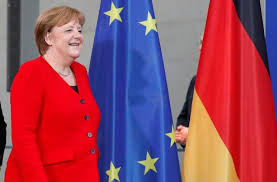 BERLIN (Reuters) – Chancellor Angela Merkel on Monday said Germany still favors picking the “Spitzenkandidat” from a winning party for the post of European Commission president while French President Emmanuel Macron’s office said he didn’t want the process to be automatic.

Merkel on Monday urged European Union leaders to agree fast on a nominee. “We want to find a solution as soon as possible given that the European Parliament will convene at the start of June and it is naturally desirable if by that time we have a proposal from the European Council,” she told a news conference.

The German leader said her conservatives and their Social Democrat junior coalition partners back the “Spitzenkandidat” mechanism, whereby the candidate that was selected by the winning party ahead of the European elections is appointed.

Macron also wants an agreement reached quickly on a nominee, “ideally” in June, though he also said the “Spitzenkandidat” system should not be automatic, an official from Macron’s office said on Monday.

The French president’s party had repeatedly said it opposed the “Spitzenkandidat” process.

Macron is confident a majority of member states can agree on opening a discussion on the nomination of the next Commission’s president, the source said.

In a telephone call on Monday, Macron told Merkel that the “Spitzenkanditaten” are legitimate, though the selection of the new president must reflect the results of Sunday vote, the source said.

The third-largest group in the European Parliament, the liberal centrists to whom Macron’s party belongs, must be part of the selection process, Macron told his German counterpart.