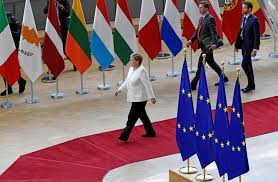 BRUSSELS (Reuters) – German Chancellor Angela Merkel said on Friday that EU leaders could provoke a crisis if they did not take into account the views of the European Parliament when choosing the next head of the EU executive.

“We suggest the person, but we definitely don’t want to see a crisis with parliament, to realize that what we suggest is not being accepted. This wouldn’t be good for the work of the Commission in the next five years,” she told reporters after leaders failed to settle on a name during their summit.

Merkel also said an agreement on top jobs should be reached before the new European Parliament meets for a first time on July 2.