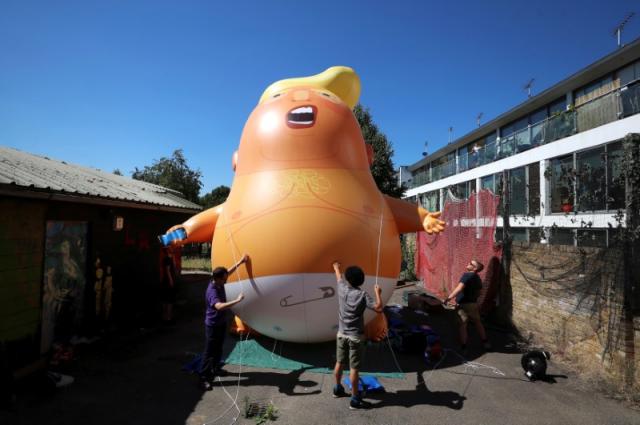 Trump, who arrives in a week’s time, will meet Queen Elizabeth and Prime Minister Theresa May, who was the first foreign leader to visit him after his inauguration last year.

Britain regards its close ties with the United States, which it calls the special relationship, as a pillar of its foreign policy as it prepares to leave the European Union.

But some Britons see Trump as crude, volatile and opposed to their values on a range of issues. Trump’s comments on militant attacks in Britain have sparked anger and he has often exchanged barbs on social media with the London mayor.

“The mayor supports the right to peaceful protest and understands that this can take many different forms,” a spokesman for Khan said.

“His city operations team have met with the organizers and have given them permission to use Parliament Square Garden as a grounding point for the blimp.”

The spokesman added, however, that the protesters would also need permission from the police and air traffic services to fly the six-meter balloon.

The protesters, who describe themselves as a group of anti-fascist art activists, said at first the mayor’s office did not recognize “Trump Baby” as a legitimate protest.

“But following a huge groundswell of public support for our plan, it looks like City Hall has rediscovered its sense of humor,” activist Leo Murray said in a statement.