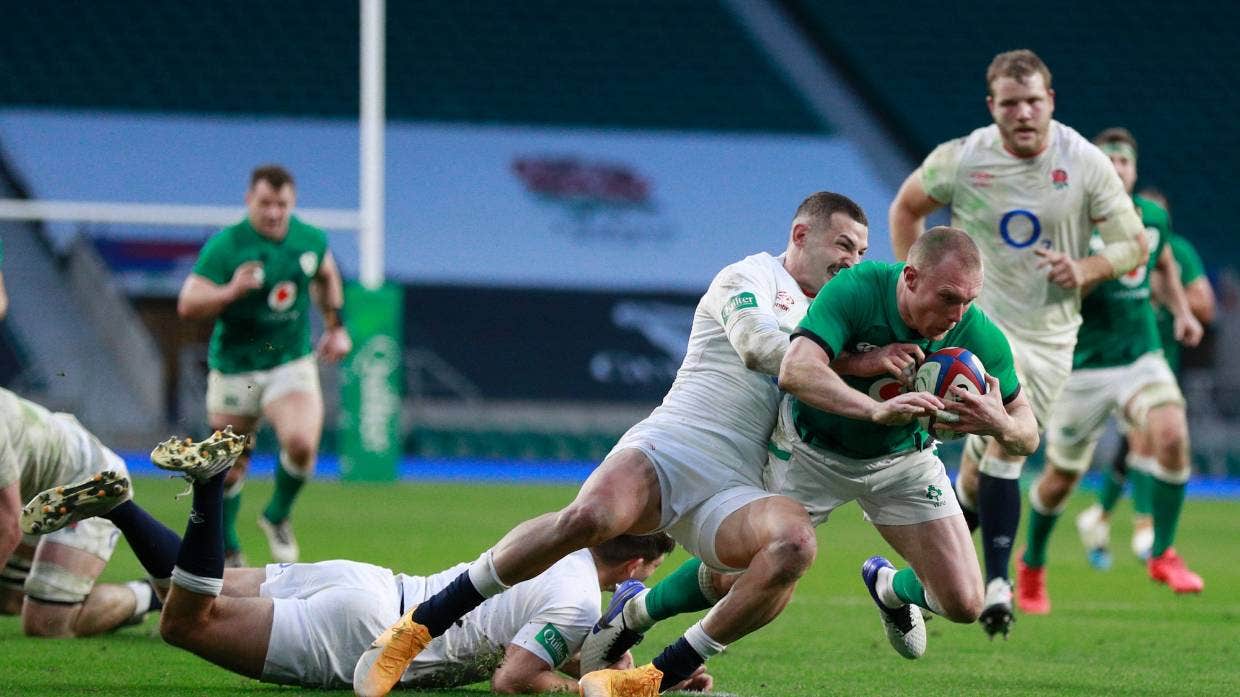 England gave Ireland another comprehensive hiding to the tune of 18-7 at Twickenham on Saturday (Sunday NZ time) and took charge of their group in the Autumn Nations Cup.

Winger Jonny May scored two first-half tries and Owen Farrell slotted three of four goalkicks as England deservedly led 12-0 at halftime and 18-0 late. They threatened to blank Ireland for the first time in 30 years but Billy Burns conjured a try for fellow Irish replacement Jacob Stockdale with six minutes left and converted it.

It was the first scores England conceded in more than three hours of rugby across its last three games including Italy and Georgia.

As good as May’s tries were, England’s defence was suffocatingly brilliant. The white shirts were quick off the line and physical, holding up Irish ball-carriers so that the visitors were not able to clear a single ruck within three seconds.

England didn’t miss its first 90 tackles and ended up making an incredible 246, missing only nine.

In contrast, Ireland missed 11 tackles, needing to make only 73.

Ireland had plenty of time in the England 22 but invariably a sustained attack was slowed down and ultimately stymied by pilfered ball. England earned seven turnovers.

Add on try-saving tackles by May and Henry Slade, and the bullied Irish suffered a fourth straight loss to England, which looks set to qualify for the final in two weeks.

England coach Eddie Jones was pleased with the win, but disappointed at not completing a clean sheet.

“We dominated the game, put ourselves in a good position to maybe go on and dominate. We didn’t, but there is a lot more in us, which is pleasing,’’ Jones told BBC 5 Live Sports Extra.

“The defence was pretty good, but we are disappointed with the try at the end. We’d have liked to have a clean sheet, as they say in football, but we are improving. I particularly liked our ferocity of our ruck defence today.”

Jones has hailed the clinical finishing skills of May after the wing ran in a sensational try as Ireland were flattened 18-7 in the Autumn Nations Cup at Twickenham.

May ended his five-Test scoring drought in spectacular fashion as two first-half touchdowns lifted him to second in the all-time Red Rose list alongside World Cup winners Ben Cohen and Will Greenwood on 31.

It leaves only Rory Underwood in front and even the England great would have been beaming with pride at May’s second, a breathtaking solo effort that started inside his own 22 and combined elusive running, speed and vision.

When asked where May ranks among the wings he has coached, Jones said: “Jonny’s right up there if you consider he’s 30 and is still improving every aspect of his game.

“He’s such a dedicated trainer and is obsessed about getting better. He’s a great role model for all the players in the teams.

“When you consider the player he was… I remember watching him in the 2015 World Cup and at one stage he was going to end up in Row K. Now he’s a serious finisher.”

Ireland head coach Andy Farrell admits his side are currently lagging behind “fabulous” England but urged his players to keep the faith during a period of transition.