May sticks to Brexit deal as opponents seek formal challenge 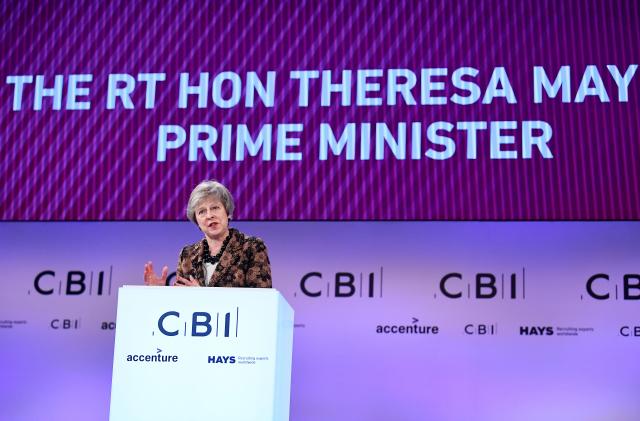 LONDON (Reuters) – British Prime Minister Theresa May vowed on Monday to stick to her draft European Union divorce deal as dissenting lawmakers in her own party tried to trigger a leadership challenge.

Since striking a deal with the EU on Tuesday, May has faced the most perilous crisis of her premiership with several cabinet ministers resigning, including her Brexit minister.

May has pledged to fight on, warning that toppling her risks delaying Britain’s exit from the EU, or leaving without a deal, a step that could thrust the world’s fifth largest economy into the unknown.

Even if she stays in place, the level of opposition from eurosceptics in her own Conservative ranks has made clear how hard it will be to get the deal through parliament.

“We have in view a deal that will work for the UK and, let no one be in any doubt, I am determined to deliver it,” May said in a speech to Britain’s premier business lobby, the CBI, to loud applause. “We are not talking about political theory but the reality of people’s lives and livelihoods.

“While the world is changing fast, our geography is not: Europe will always be our most proximate goods market, and ensuring we have free-flowing borders is crucial,” May said, citing the importance of the automotive industry in particular.

The EU is due to hold a summit to discuss the draft deal on Nov. 25. Some eurosceptic ministers in May’s cabinet are reported to want to rewrite parts of it, though EU governments have largely ruled this out.

The EU’s Brexit negotiator, Michel Barnier, called the draft “fair and balanced” and offered the orderly exit in March that would form a basis for a future trade deal.

May said she wanted any Brexit transition, during which Britain will remain a member in all but name and voting rights, to have ended by the time of the next national election, due in 2022. The EU has signalled it could accept Britain extending the transition by up to two years from December 2020.

Barnier met ministers from the 27 EU governments in Brussels as they try to complete a separate, non-binding “declaration” on plans for a trade and security relationship with Britain that May would agree at a summit in Brussels on Sunday.

Diplomats said many pushed national interests to be included – France on fishing rights, for example, or Spain’s claim to Gibraltar. But there was little concern these would scupper prospects for a text to be ready by Tuesday.

Where there was disagreement among the 27, they said, issues would be put to one side until talks start with Britain next year. May has said she will visit Brussels to discuss the declaration before Sunday.

More than two years after the United Kingdom voted by 52-48 percent to leave the EU, it is still unclear how, on what terms or even if it will leave as planned on March 29, 2019.

Many business chiefs and investors fear politics could torpedo an agreement, thrusting the economy into a no-deal void that they say would weaken the West, spook financial markets and silt up the arteries of trade.

CBI President John Allan said such a Brexit would be a “wrecking ball” for Britain’s economy while CBI Director-General Carolyn Fairbairn said politicians were playing a high-stakes game that could lead to an accidental, no-deal departure.

“Surely, surely, we can do better than this,” she said.

Opposition Labour leader Jeremy Corbyn told the business leaders that his party would not countenance a no-deal Brexit but would also vote against May’s Brexit blueprint.

“After the events of the past week, many people and many businesses will be confused and very, very anxious,” Corbyn said in a speech. “The prime minister has negotiated a botched, worst-of-all-worlds deal which is bad for Britain, leaving the country in an indefinite halfway house without a real say.”

Asked about the unpopularity of her deal among many in her Conservative Party, May said voters should listen to business.

However, Conservative rebels who say the deal will leave Britain in indefinite subjugation to the EU, in part through a continued customs union of uncertain duration, are attempting to trigger a vote of no confidence in her leadership.

The chairman of the party’s “1922 Committee”, Graham Brady, said on Sunday the threshold of 48 letters from MPs had not yet been reached. He also said that if there were a vote, May would win. The Sun newspaper said the rebels were six letters short.

One of them, Simon Clarke, told BBC radio: “This day must be the point at which … action is taken.”

But by 6 p.m. (1800 GMT) on Monday, there was no sign of a formal challenge. Sterling, which has fluctuated wildly in response to the political turmoil, was flat at $1.2860 GBP=D3.

Since she won the top job in the turbulence that followed the 2016 Brexit referendum, May’s premiership has been characterised by obduracy in the face of frequent crises.

Her biggest challenge will be getting the deal through parliament. The DUP, a small Northern Irish party that props up her minority government, has threatened to pull its support because the deal could end up treating Northern Ireland – given the goal of keeping its land border with EU member state Ireland open – differently from the rest of the United Kingdom.