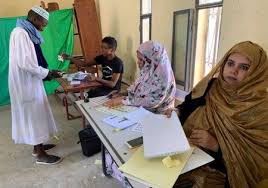 NOUAKCHOTT (Reuters) – Mauritania began counting ballots on Saturday evening from its presidential election, as the ruling party claimed its candidate was poised to win a landslide victory.

The election was the first in Mauritania’s history since independence from France in 1960 to choose a successor to a democratically-elected president.

“Our candidate is going to win the election with flying colors,” Domane said. “You are going to have the confirmation in a few hours.”

Provisional results could be announced by the electoral commission as soon as late Saturday night.

Opposition candidates, speaking earlier in the day, complained about potential fraud, noting the absence of international observers and the printing of ballot papers by a company with ties to the ruling party.

Election officials said there were no political considerations in awarding the contract. Voting in the capital Nouakchott appeared to be largely free of incident.

Since coming to power in a 2008 coup, Abdel Aziz, 62, has positioned Mauritania, home to fewer than 5 million people across a vast expanse of the western Sahara Desert, as an ally of the West against Islamist militants.

Bound by term limits, he threw his support behind the 62-year-old Ghazouani, bucking a trend in which African leaders, including in Rwanda and Congo Republic, have changed term limits to stay in power.

Nevertheless, Abdel Aziz could maintain significant influence behind the scenes. He said on Thursday that he had not ruled out running again in five years when his term limits would reset.

Gilles Yabi, the founder of West African think tank WATHI, said that, if victorious, Ghazouani would likely continue to rule in Abdel Aziz’s mold, but that he could still surprise.

“Ghazouani is someone who is very discreet. It could well happen that the change is not merely cosmetic,” Yabi said.

Five candidates besides Ghazouani were on the ballot. Former prime minister Sidi Mohamed Ould Boubacar, who is backed by Mauritania’s biggest Islamist party, drew large crowds on the campaign trail and was considered Ghazouani’s main rival.

Ghazouani campaigned on continuing economic and security progress made under Abdel Aziz. Gross domestic product is growing and will receive an extra boost when a large offshore gas field starts producing early next decade.

Tourists are starting to return for desert tours after years of staying away following a series of kidnappings in 2009.

In recent years, Mauritania has been spared the attacks by jihadist militants linked to al Qaeda and Islamic State that have devastated other countries in West Africa’s Sahel region, including neighboring Mali and Burkina Faso.

Documents seized from Osama bin Laden’s Pakistan hideout in 2011 indicated al Qaeda’s leaders had discussed among themselves the previous year a possible peace deal with Mauritania’s government that would involve prisoner releases and payments.

The government denied any such deal existed and has credited its success preventing Islamist attacks to intelligence work and rehabilitation of imprisoned jihadists.

“The security and stability of the country must be the priority in choosing the president we need,” Abdel Aziz told reporters after casting his ballot.

The opposition candidates, who include a prominent campaigner against slavery in the country, have tried to tap into dissatisfaction among young people over stagnating salaries and poor health care.

“I thank God that everything is going well,” said 35-year-old Abderrahime Sidi after casting his ballot. Like most voters, he declined to say whom he had chosen.

“We hope that the results will be consistent with the expectations of all Mauritanians,” he said.